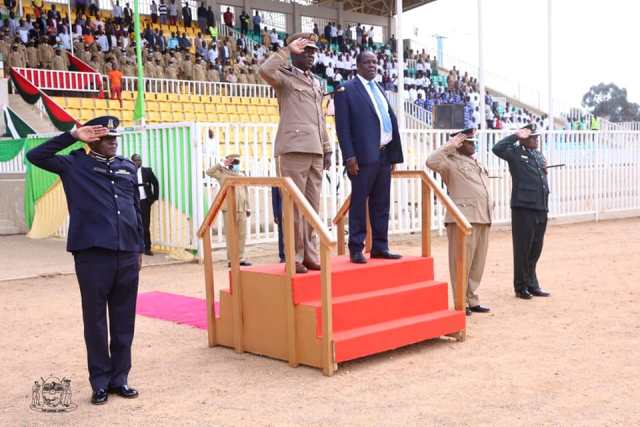 Kakamega Governor H.E Dr. Wycliffe Ambetsa Oparanya addressed his last Madaraka Day celebrations in his capacity as the First Governor of Kakamega County Wednesday, using the occasion to outline his achievements for the two terms he served as the County’s Chief Executive Officer.

He stated that he is exiting the County with his head held high due to the transformation he has overseen in Kakamega earning the treeCounty a national recognition and admiration from her peers. Since inception and actualisation of devolution in 2013 to date, Dr. Oparana noted, Kakamega County received revenues amounting to Sh94.095 billion from the Exchequer, Grants and Own source revenue.

Roads, Public Works and Energy Department, he explained, was allocated the giant share of the budget amounting to Sh11.56 billion translating to 32.26 percent.

The Governor added that establishment of the Kakamega County Revenue Agency enhanced collection of local revenue noting that annual revenue collection increased from Sh329 million in the Financial Year 2013-14 to Sh1.118 billion in the FY 2020/21.

In order to improve agricultural production and improve food security, the Governor stated, the County Government distributed 887,771 bags of subsidized planting and 784,943 bags of top dressing fertilizer and 1,098,936 packets of maize seeds to farmers. These initiatives helped increase maize production per acre from 5 bags in 2013 to 12 bags in 2021.

The ambitious programme initiated by the Governor of upgrading gravelled roads in Kakamega has seen his Government upgrade 150 kilometres of gravel roads to bitumen standards against his target of 200 kilometres. In addition the County Government has managed to construct a total of 5,533 kilometres of roads under the 10 kilometre per ward roads programme.

Initiation of the ongoing construction of the mega Level Six Kakamega County Teaching and Referral Hospital whose phase one is 93 percent complete was one of the crucial projects by the Ministry of Health Services. The County is in the process of handing over the project to the National Government for completion and operationalization due to the high operational cost involved in running such a facility.

“The County Government improved infrastructure at the County General Hospital by constructing an Eye clinic, a modern Funeral Parlour, a Bio- Medical Waste Management Plant, installed CCTV cameras and renovated key facilities in order to enhance the facility’s capacity to discharge it’s services,” he observed, adding that construction and equipping of Mumias Level Four hospital as well as the ongoing construction of Shamakhubu and Butere Level 4 hospitals are all geared towards offering quality health services.

The Governor noted that the County has realized growth resulting in investments and enhanced trade adding that to boost trade, the County constructed 12 modern markets in each Sub-County as well as open air markets among other projects.

Governor Oparanya pointed out that through various investments, the proportion of citizens accessing safe and clean water has increased from 36 percent in 2013 to 61 percent in 2022. He highlighted establishment of Kakamega County Water and Sanitation Company (KACWASCO) and Kakamega County Rural Water and Sanitation Company (KACRWASCO) to serve urban and rural areas respectively as some of the initiatives that have boosted water supply in the County. Currently the companies are serving over 36,000 households with clean and safe water.

Upgrading of Bukhungu stadium to international standards and other sporting facilities across the County will go along way in tapping and developing talent in Kakamega County.

The County Government has invested in changing the faces of urban areas alongside establishment, operationalization and development of infrastructure in Kakamega and Mumias Municipalities.

The Department of Finance, Economic Planning and ICT has been critical in enhancing governance as well as sustaining all other sectors, an enabler department. Kakamega County Revenue Agency and Kakamega County Investment and Development Agency were set up to enhance local revenue and coordinate investments.

“The County Government established an Automated Assets and Liabilities Information System that enables tracking the status and value of County assets and liabilities adopted and oparationalised e-Procurement system and achieved 95 percent payments through IFMIS thus enhanced accountability and transparency.”

H a smooth working relationship with County Assembly and hard work and dedication by County staff has been a cornerstone of his success as the first Governor.

“As I move on to serve the public in other capacities, it is my sincere hope that the next County administration will sustain the momentum and even take it a notch higher for the benefit of the people of Kakamega,” he concluded.