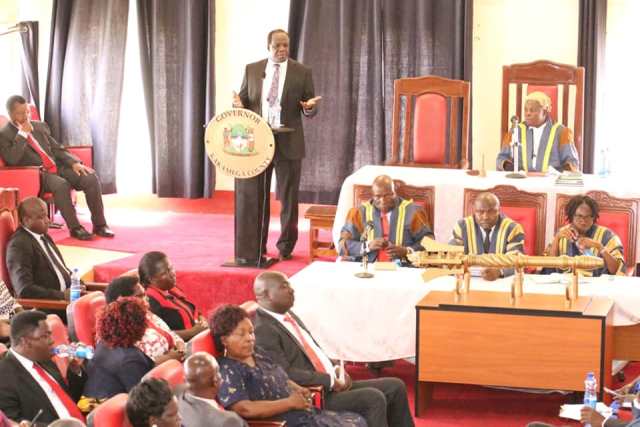 Kakamega governor H.E. Hon. FCPA Wycliffe Ambetsa Oparanya has cautioned Members of the County Assembly to brace themselves for austerity measures, adding that the national government had fallen short of tax revenues by a whopping Shs 100 Billion.
“The recent Intergovernmental Budget and Economic Council (IBEC) meeting approved to cut equitable share for counties by Shs4 billion from CRA’s recommended Shs 320 billion to Shs 316 with effect from July 2020,” he said.

The governor made the remarks today when he officially opened the 4th Session of Kakamega County’s Second Assembly.

“The coming year will be gloomy, you should exercise prudence in expenditure and practice servant leadership,” he added.

On sugarcane farming, the governor expressed optimism on revival of the ailing Mumias Sugar Company saying that upon receipt of the national sugarcane taskforce report on Monday (yesterday), President Uhuru Kenyatta directed immediate reinstatement of the sugar development levy for the benefit of cane growers.

Governor Oparanya who is also the co-chair of the taskforce said the mandate of the team was extended by the president for two more months to enable the team to recommend implementation of “quick wins” from the raft of the report’s proposals.

They include reintroduction of the Sugar Act, leasing of public mills to private investors and fast tracking gazettement of sugar rules and regulations.
However, the governor cautioned that Mumias Sugar Company faces numerous debt-related litigations one of which is filed at the ICC in the Hague.

The County boss was however satisfied with his government’s administrative and technology interventions to increase own revenue collections in Kakamega County.
“We have grown our revenues from Shs 890 million in 2018/2019 to the projected Shs 2 Billion by end of the current year,” he said.