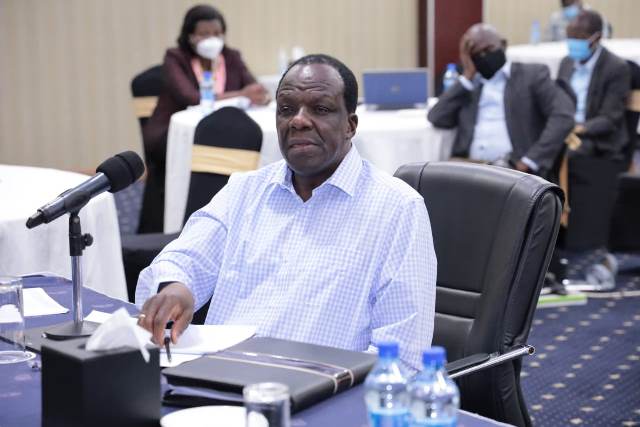 Governor H.E Dr FCPA Wycliffe Oparanya will present the budget estimates for the Financial Year 2021/2022-2023/2024 to the Kakamega County Assembly in person.

He said he will table the financial document to the Assembly’s Budget Committee as a show of commitment he has for the budget preparation process for the County.

He noted that this will be his last budget estimates since taking over power as the first Governor.

Governor’s message was delivered by CECM for Roads Mr Geoffrey Omulayi who represented him during the closure of the two-day consultative meeting on budget where departments presented their Budget estimates for scrutiny and amendment.

The Governor chaired the meeting for the two days but left before the closing ceremony.

He told the officers to ensure the advisory and guidelines the other officials and him made have been included in the final document that he will present to the Assembly.

“The Budget estimates should be realistic,” said the Governor.

He noted that his target was to have the Budget approved by the Assembly by 30th June.

For the second day running CECMs led other senior departmental heads in presenting their budget estimates to the joint county consultative meeting chaired by the Governor.

Education CECM Dr George Lutomia and his Chief Officer Dr Irene Ashioya in their presentation stated that Sh196 million had been put in the Budget for capitation of 10,321 polytechnic trainees another Sh80 million for infrastructure development of the selected polytechnics among other development programmes.

Dr Collins Matemba presented the budget for Heath department and said Sh10 million will be used to equip the state of the art Eye Hospital at CGH and operationalise it, Sh23 million for completion of construction of phase one of the doctors’ plaza and Sh15 million for setting up blood banks in other facilities outside CGH among others.

Mr Kassim Were said Sports department has set aside Sh50 million for the County Sports Fund for supporting sporting teams and other activities and another Sh10 million for the Women empowerment centre.

Countg Secretary, Madam Jacinta Aluoch gave a detailed report on the budget estimates for the Office of the Governor (OG).

Other departments that made presentations include Finance, Public Service, Agriculture, Roads, Water, Trade and Lands.