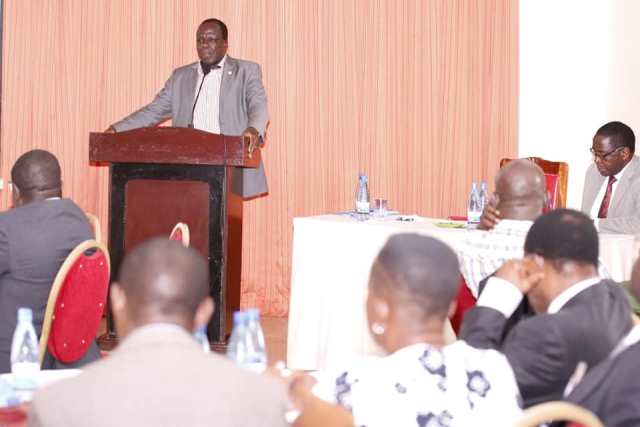 Kakamega Governor H.E. FCPA Wycliffe Ambetsa Oparanya today directed all ministry accounting officers (Chief Officers) to give financial reports on their respective dockets on a monthly basis starting this month in what was seen as a way of taking efficiency and accountability a notch higher.

The chief officers will be presenting the reports to a senior team led by H.E. the governor and consisting of the deputy governor, CECMs, heads of parastatals and sub county administrators, among others.

Consequently, the county weekly revenue meetings that have been running for months now, will be held once a month and not on a weekly basis.

The governor said this today during the weekly county revenue meeting held at the Golf hotel, Kakamega.

“The financial reports should include status of imprests, outstanding or pending bills, as well as status of project implementation,” he said.

In addition, the Chief Officers will be tasked with reporting on the absorption rates of both development and recurrent budgets and also give account of the status of budget implementation.

In addition, the ministries accounting officers have been instructed to do the following;

i) Give a breakdown of the revenue collected in their departments;
ii) Give status of project implementation including name of project, commencement date and expected completion date;
iii) Reports on the status of flagship projects i.e Water supply and Electricity, The Referral Hospital and the two level 4 hospitals and the Stadium and;
iv) Report on the status of both Internal and External Audit reports.

In these new directives, heads of parastals i.e CEOs, will also be required to give similar reports specific to operations of their agencies.

“I have received concerns that staff transfers and disciplinary cases are not being conducted fairly in some quarters and for this reason the department of Public Service and Administration in conjuction with the County Public Service Board should give a report on the total staff establishment and all available vacancies in the county, all transfers effected, as well as the deaths, resignations and retirement of all staff,” said the governor.

The county boss further directed that all internal transfers be effected by a senior management committee to avoid victmization of staff by their controlling officers.