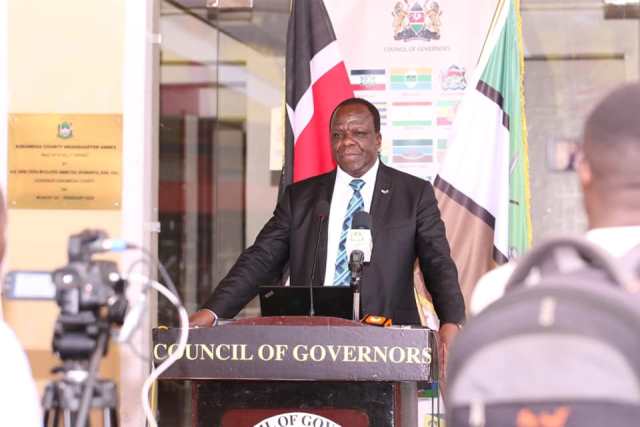 Governors and their deputies will for the coming three months offer a 30% voluntary pay cut on their salaries in a step taken to mirror the efforts of the President in line with the Presidential initiative to offer a voluntary reduction of salaries of senior ranks of the National Executive.

County Executive Committee Members (CECMs) and Chief Officers will also offer a 20% and 15% pay cut respectively as County directors and senior officers from Job Group R deal with a 10% paycut.

The announcement was made Thursday evening by Kakamega Governor and Council of Governors (CoG) Chairman H.E. Wycliffe Ambetsa Oparanya at the County headqarters in Kakamega.

“As governors, we have also resolved that other cadre are welcome to voluntarily contribute whatever percentage they deem fit,” governor Oparanya said.

He also called upon the County Assemblies to follow suit and and agree on a figure saying the initiative is for the benefit of the citizens.

Governor Oparanya however observed that the Personal Protective Equipment (PPE) kits that are being distributed to Counties are of low quality not able to protect health workers in the line of duty and called on KEMSA and KEBS to ensure the kits are of good quality.

“We also note that most Counties have not received the PPE kits despite a consistent follow up by the Council,” the governor said and urged the National Government to fastrack distribution of the kits.

“Slum dwellers, Vulnerable groups and the urban poor should be supplied with free water,” the CoG Chair said.