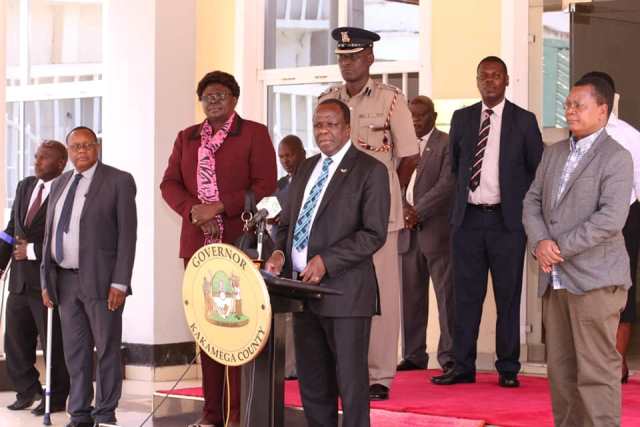 Kakamega County Governor H.E. FCPA Wycliffe Ambetsa Oparanya has ordered County government offices to close down their operations with immediate effect for 15 days as a measure of containing the spread of Corona virus in the County; with the exception of Health servives, Security & Enforcement, Water & Sanitation, Cleaning & Garbage collection and Finance and Revenue.

The Executive Order from the County boss follows new developments, also announced by him, that Kakamega has recorded its first confirmed positive Covid-19 case on a 19 year old student who travelled from Switzerland through Qatar-Nairobi-Kisumu airports to his rural home in Musanda ward, Mumias West sub county.

The Governor however explained that the victim is among the 28 earlier cases announced by Health Cabinet Secretary Hon. Mutahi Kagwe.

“Samples taken from the student who is now in isolation at Mbagathi hospital tested positive and we have also traced the Bodaboda rider who ferried him to his rural home and he is now quarantined at the County isolation facility at the Kakamega County Referral Hospital awaiting his results,” the County boss said.

In addition, the governor added, the County is awaiting results of six more victims among them three senior County Government officers who jetted back into the country in February from Italy and three Asian nationals working in Shinyalu sub county.

“Hon. Timothy Aseka, Member of County Assembly (MCA) from Khwisero sub county who travelled from London this month together with his family must be placed under isolation as we monitor their situation,” he directed

The Governor however urged residents to exercise compassion to the affected family, observing that the residents were hostile to the boy’s family as the news of his status reached the village.

The sentiments were also echoed by Kakamega County Commissioner Madam Pauline Dola who also warned of dire consequences on any teacher found conducting tuition to students during this period. She called on parents to caution their children against unnecessary movement.

Governor Oparanya also announced that the county has set up screening equipment at all Level 4 hospitals and at the County General & Referral Hospital and encouraged patients to visit the facilities-operational in all the sub counties- for general screening. He said a raft of measures have been put in place by the County Emergency Response team, which he co-chairs with the County Commissioner, such as; sensitization of residents on the preventive measures required to contain the virus, sensitization of 11068 medical personnel who include Community Health Volunteers, Repair of water leakages and Installation of 100 litre tanks of water in markets and bus stages across the county to ensure a steady supply of water for purpose of maintaining high levels of hygiene.

On the national stage, the Governor who is also the Chairman Council of Governors commended President Uhuru Kenyatta following his (President’s) move to reduce V.A.T, P.A.Y.E and Turnover taxes saying it was a good idea to cushion Kenyan citizens from the tough economic times.

He said Kakamega County was already mapping out the most vulnerable members of the society to cushion them from the tough times in the event of a total national lockdown.

Also present were the deputy governor H.E. Prof. Philip Museve Kutima and other senior government officers from both levels of government.