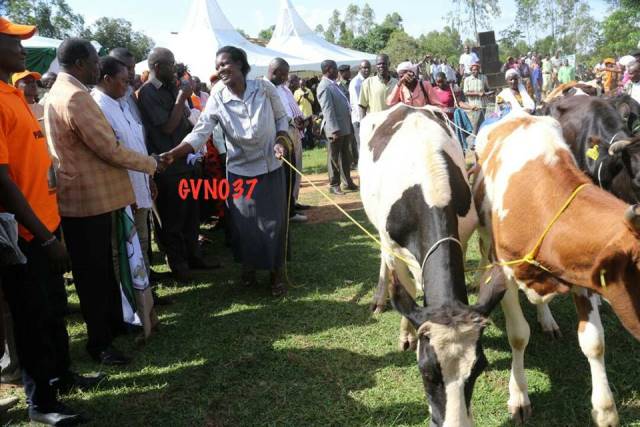 Residents of Kambiri in Shinyalu Sub-County today benefitted from the third phase of the One Cow Initiative affirmative action when Governor Oparanya gave out 60 grade cows to women farmers. This brings to a total of 180 cows so far distributed to farmers in the Sub-County.

Governor Oparanya said the decision to give the cows to farmers of Shinyalu even after doing so in the second phase was to raise the amount of milk produced in Shinyalu after earlier studies indicated the sub county and Ikolomani had the fewest number of grade cows.

Later on the Governor inspected the on going construction works at Khwirenyi Girls Secondary School. The school has been categorised as a centre of excellence by the government in line with the government efforts to raise levels of education in the county. The education function is not fully devolved but the county government has continued to offer its support to the sector by constructing learning classrooms in primary and secondary schools as well as constructing and fully equipping county polytechnics to offer vocational trainings to students who fail to attain the required grades to enrol for college and university education. Governor Oparanya called on residents to enrol for programs offered in the polytechnics at no cost.

He was accompanied by Deputy Governor H.E Prof. Philip Kutima, CEC members, Members of the County Public Service Board, MCA’s among others.