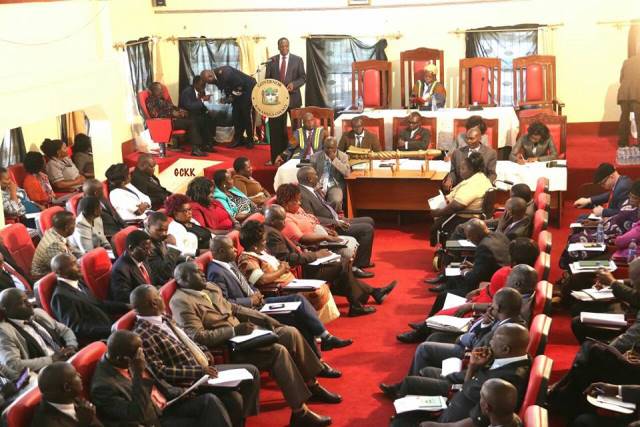 Governor Oparanya congratulated the Speaker Hon. Morris Buluma following his re-election as the speaker and extended the same message to the honourable members for their successful campaigns leading to their re-election and nomination to serve in the County assembly.

The Governor stressed the need for all county elected and nominated leaders to be united for the sake of development calling on them to put aside their differences based on party affiliations. He reiterated his resolve to ensuring the spirit of devolution in respect to empowering the people through public participation is fully realised as stipulated in the Kenyan constitution.

H.E The Governor noted the tremendous progress made on projects in key areas notably the road network, agriculture, health services, ECD education, water and sanitation among others adding that the county is not where it ought to be in terms of development but was clearly headed in the right direction.

Governor Oparanya also mentioned that thirteen counties in the Lake Region, Kakamega included, are committed to see the living standards of the people improve by economically empowering the people through investments. He cautioned government employees keen on passing time at the county offices saying their days are numbered as he was focussed on discharging the mandate given to him by the electorate hence required full commitment from the staff.

He thanked all NASA leaders from Kakamega County for having come together to support the coalition’s presidential candidate Hon. Raila Amolo Odinga.