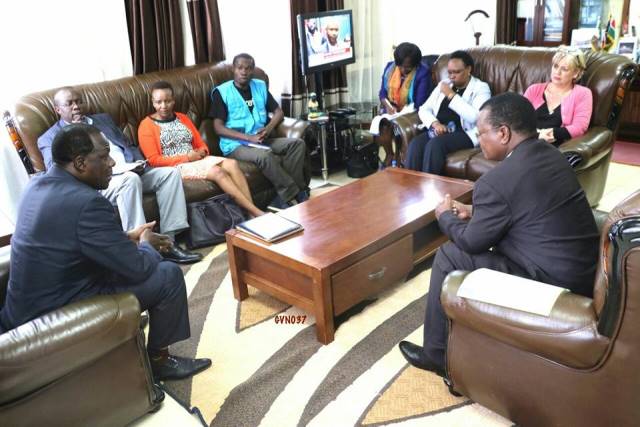 Governor Oparanya informed the visitors about the progressive negotiations between the county government and National Hospital Insurance Fund (NHIF) to register Kakamega residents on a County Universal Health Care Scheme. The first phase will see 400,000 households benefit from this scheme.

DFID, through Unicef, sponsors Maternal Newborn Child Health Services in the county under the ‘Imarisha Afya ya Mama na Mtoto’ Program popularly known as “OparanyaCare Program”. Currently the program has over 45,000 registered mothers since its inception two years ago leading to a significant drop of maternal mortality rates in the County according to surveys conducted by UNFPA and KDHS. The next survey is expected to be conducted in 2019/20 where the county expects to record great improvements in its efforts of reducing child mortality rates, by then.

DFID Reproductive Health Advisor Milkah Choge, said they will review the sponsorship to include additional Comprehensive Obstetric Care Centers (COCC) from the current four (Lumakanda, Malava, Butere and County General Hospital). These facilities will contribute to the government’s efforts of reducing maternal-infant mortality in the county as surgical services during birth, shall be easily accessible.

The Governor observed that his government targets to have at least 12 modern COCC, one per sub county during his second term as the Governor.