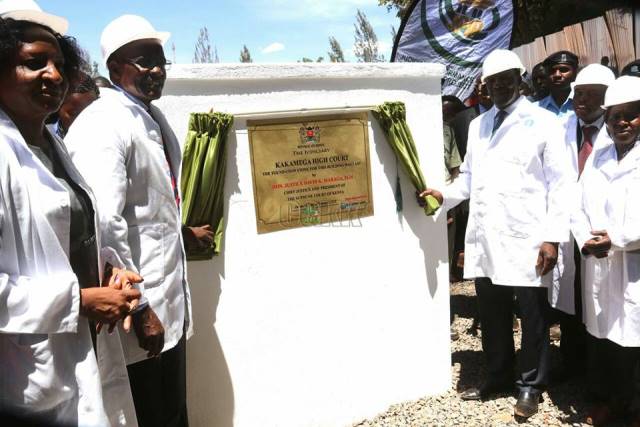 Governor Wycliffe Ambetsa Oparanya has called on the President of the Supreme Court David Maraga to ensure independence of the Kenyan Judiciary.

Speaking after laying a foundation stone for the construction of Kakamega High Court in Kakamega, Governor Oparanya said his government fully supports an independent judiciary and called on citizens of the county and institutions as well to submit to the rule of law and honour court summons.

The Governor appealed to the Judiciary to quickly oversee construction of more courts in Kakamega County especially in the Northern region of Likuyani and Lugari sub counties. This he said, would reduce visits made to neighbouring counties by residents of Kakamega and resolve a backlog of cases lying in the courts. Governor Oparanya said already the County Government has allocated land for the same and the works would be fully welcomed by his government.

H.E the Governor said construction and operationalisation of county courts within Kakamega which had been initiated by his government after he took over the county leadership stalled as the contractor was incapacitated. He said the county government has however, in this financial year allocated more funds for that project to ensure its faster completion. Once the court is operational, it will lead to an agreement in revenue sharing between the County Government and the judiciary. He further called for the need to re-introduce legal clinics for sensitization of the public on various issues adding that they were very educative to the public when they existed.

Chief Justice David Maraga thanked the Governor for the tireless support he has shown to the Judiciary especially in land acquisition and allocation. He announced that his arm of the government has initiated construction of a high court in each of the 47 counties and a magistrate’s court in every sub county as a way of bringing services closer to the people. Hon. Maraga stated that the judiciary has resolved to clear all cases running above 5 years by the end of the year 2018.