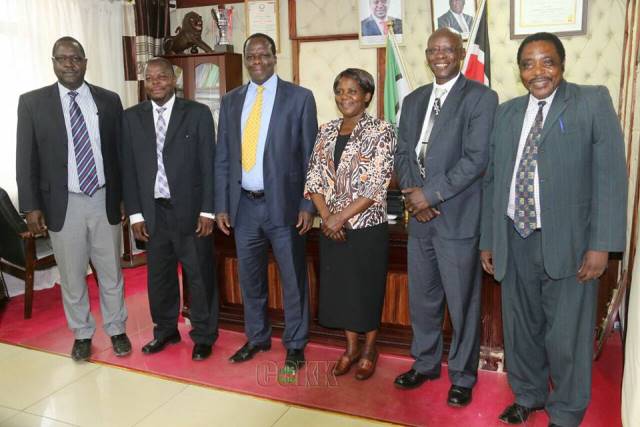 Kakamega County office headquarters was a buzz of activity as H.E Governor Wycliffe Ambetsa Oparanya hosted various delegations as he seeks to strengthen ties, improve the economy; nurture and develop talents in the socio-cultural rich County.

In preparedness for the upcoming visit by the Chief Justice David Maraga, County Judiciary team led by Lady Judge Hon. Ruth Sitati and Chief Magistrate Hon. Bildad Ochieng’, paid a courtesy call to the Governor as plans to host the Supreme Court President hit the ground. Key among matters discussed was laying foundation for construction of Kakamega High Court by the CJ. Once complete and operational, the facility will highly reduce the cost of seeking justice by residents of Kakamega who have initially been making way to Eldoret or/and Kisumu.

Trans-Nzoia County Council of Elders Chairman Daudi Juma Daraja led a delegation of 50 members that called on the County Chief Executive, in liaison with other Western region counties (formerly Western Province) to fastrack the operationalisation of Mulembe Investment Bank. As noted by every speaker, the institution will uplift the region’s economy through borrowing and lending. They also deliberated and agreed on the need to have a Western Counties Cultural Festival Week for residents to appreciate their oneness and cultural diversities.