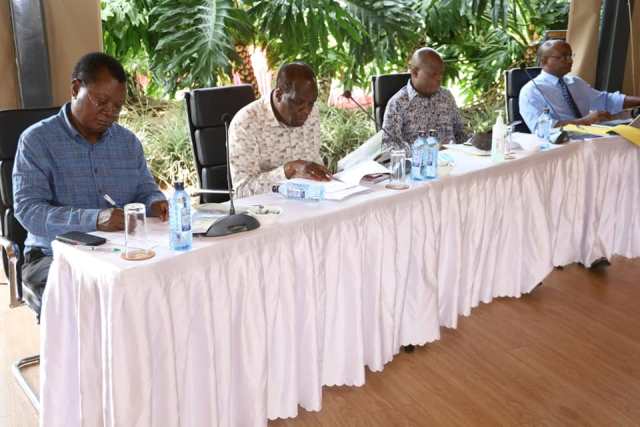 The City County boss was speaking when he paid an impromptu visit to his colleague Governor H.E Dr. FCPA Wycliffe Ambetsa Oparanya during a meeting convened to discuss key Kakamega County bills and issues, Monday.

Prof. Nyong’o said Kakamega and Kisumu are the only counties within the Lake Region Economic Bloc (LREB) so far implementing the Affordable Housing Project in line with the requirements of the National Government’s Big Four Agenda on Housing. Kakamega, he added, is on course with fulfillment of the necessary provisions to be upgraded to a city.

The housing project targets to construct 4000 units with beneficiaries drawn from all cadres of staff at the County Government, National Government as well as other civil servants. It is comprised of Studio Apartments, 1 bedroom units, 2 bedroom units, 3 bedroom units and 4 bedroom. The project will also include a shopping mall, ECD Centre and a health facility.

Governor Oparanya thanked Prof. Nyong’o for the gesture applauding him for the support accorded by his County to Kakamega in the spirit of fostering inter county relations.

“This is a continuation of the numerous responsibilities bestowed to us by members of the public to improve the services as envisioned by devolution,” he noted.

Development of the project is based in different locations within Kakamega County namely: Mudiri, Otiende/Public Works, Old Airport, Lubao and Mumias.

During the meeting also, the officers deliberated on the County Pensions Bill.