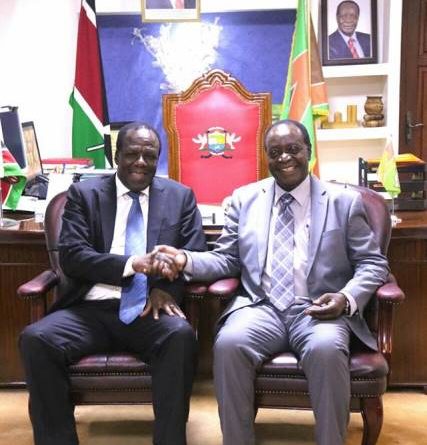 Kakamega County Governor H.E Wycliffe Ambetsa Oparanya has congratulated his Vihiiga counterpart H.E Wilber Otichillo for being elected as the Governor Vihiga County and for his visionary approach towards restructuring the County after settling in office.

Speaking after a lengthy consultative meeting at Vihiga County government headquarters, Mbale; Governor Oparanya hailed his host for sharing his experiences since assuming office. Being his first official visit to Vihiga county since the 2017 August election, H.E the Governor said he would borrow a leaf from Governor Otichillo’s mapping skills and implement the same in Kakamega.

In matters health care, H.E Governor Otichillo observed that Kakamega has made great strides in provision of better and affordable health care to its populace in particular the “Afya ya Mama na Mtoto” programme populary referred to as “Oparanya Care” which has immensely reduced infant mortality rates in Kakamega county. He promised to roll down the same programme for the expectant mothers of Vihiga.

Kakamega and Vihiga having been earlier one unit called Kakamega District, before being separated by the then boundaries commission, the Governors reiterated their resolve to work together tirelessly for the benefit of the people. Governor Oparanya announced that because of that co-operation and togetherness, the two counties have agreed to tarmac the 13 kilometres long Chavakali-Eregi-Bushiangala road which connects Vihiga and Kakamega with the latter funding 9 kilometers construction works and Vihiga tamarcking 4 kilometres. This, he said, was just one among the many other programmes to be rolled out.

Governor Oparanya also extended Kakamega’s assistance to Vihiga county on the use of the fire fighting engines which are unavailable in the latter county whereas Kakamega has four promising to release the engines, personnel and equipment to Vihiga whenever need arose.

The host Governor thanked his guest for the continued partnership and in particular allowing his government sponsored Vihiga United FC to use Bukhungu stadium in Kakamega as its homeground. The team will compete in the 2018 Kenya Premier League.

The two Governors promised to strengthen the Orange Democratic Party’s (ODM) grassroot support in the two counties and the entire Western region noting that they were both elected on an ODM ticket hence the need to popularize Kenya’s most vibrant party. They called for the unity of Western Kenya counties formerly Western province.