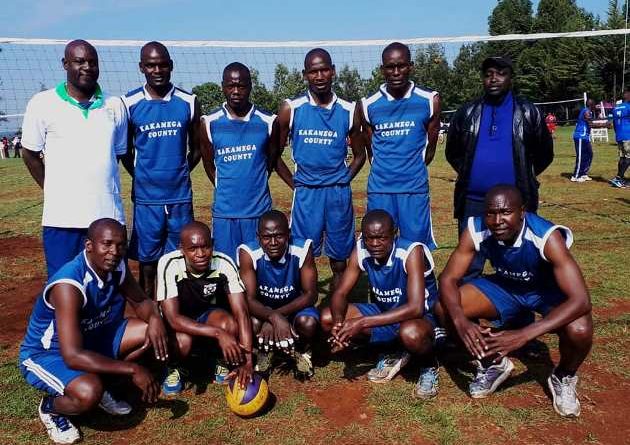 The team coached by former volleyball player and current Head of Administration at the county government of Kakamega Mr. Wilson Sifuna Yaola took the first two sets as Kisumu staged a come back to win the 3rd and 4th sets. Brilliant performances from Libero Meshack Anene, captain Jonam Maunde and his assistant Kevin Wafula however denied Kisumu any further upset against Kakamega as the latter emerged winners on a 3-2 aggregate.

Defending champions and three time (in a row) winners of the category, Uasin Gishu county who beat Kisumu 3 sets to nil yesterday laboured to secure a win against a gallant Kakamega team in another pool H match, arguably the pool of death, played this evening. Both Kakamega and Uasin proceed to the quarter final stage.

After a man of the match performance in the first match against Laikipia county yesterday, Kennedy Wandiri was again the toast of the Kakamega team today as he converted a neatly curled pass from on-form winger Joseph ‘Etoo’ Etemesi to put Kakamega on the lead in the 18th minute. Vihiga would threaten from the flanks but the Kakamega centre back pairing of Jacob Omulievi and Joel Namayi proved too strong for the Vihiga forwards.

Kennedy Wandiri was at it again striking the last nail on the Vihiga coffin in the 83rd minute when he tapped in a loose ball after a goal keeping error that saw the Vihiga goalie fail to clear the ball from their danger zone. With a dominant midfield play from Nashon Muyeka and Alphas Khaemba clearly outsmarting their opponents, the win by Kakamega now sends them to the quarter final stage with a game to spare. In a post match interview Captain Sam Anyova said his charges are determined to lift the football trophy currently being held by defending champions Machakos county. The team’s tacticians are Mr. Edward Odera, a sports development officer in the Ministry of Social Services, Culture, Youths and Sports and former Kenya international Anthony Okumu, the ward administrator for Mahiakalo ward, from the Ministry of Public Service and Administration.

Kakamega county tug of war team lost narrowly to an experienced Nakuru side earlier in the day. Both teams however proceed to the knock out stage. Team captain Jackson Wakhanu, a fire engine operator, said absence of some of his key players who are on leave slightly affected their perfomance but promised to give their opponents at the knock out stage a run for their money.