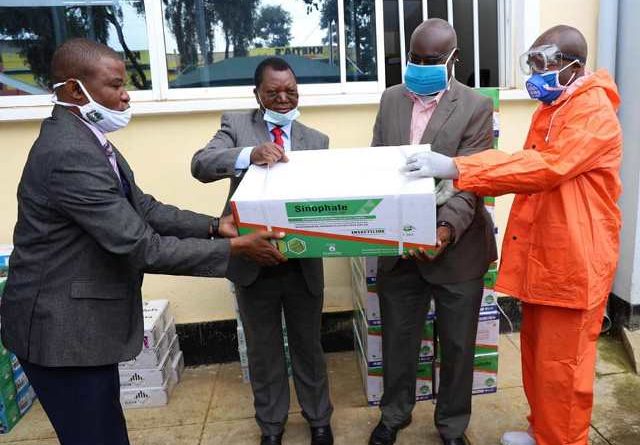 The County Government of Kakamega has received chemicals worth over Kshs. 7 million from the State department of Crop Development, Ministry of Agriculture to assist in the control of Fall Armyworms and
Locusts in the county.

According to the United Nation’s Food and Agriculture Organization (FAO), the country might witness another wave of attack on crops by desert locusts and fall army worms before end of this year.

Capacity building exercises will be conducted to ensure farmers across the county embrace proper application techniques and safe use of the chemicals. Sub County Agricultural Officers (SCAOs) will spearhead the exercise..

The chemicals received were Radiant, Volium Tago, Lotus and Sinophate.

“We are thankful to the National Government for this donation as we seek to make Kakamega food secure in line with the government’s agenda on Food security,’’ Kakamega deputy governor Prof. Philip Museve Kutima said Monday morning after receiving the consignment at the County headquarters.

“The agricultural officers will target the vulnerable farmers identified by Community Area Administrators (CAAs) in all the sub counties,’’ he said.

Prof. Kutima who is also the CECM for Agriculture, Irrigation, Cooperatives, Veterinary and Livestock services advised the SCAOs who were drawn from all the 12 sub counties to observe the required safety prevention measures against Covid-19 virus as they engage in the capacity building exercise. He also called on them to ensure the planting and top dressing subsidized fertilizer is available to farmers in preparation for the second planting season.

The county government purchased 175,000 bags of both planting and top dressing fertilizer to be sold to farmers at a subsidized cost.