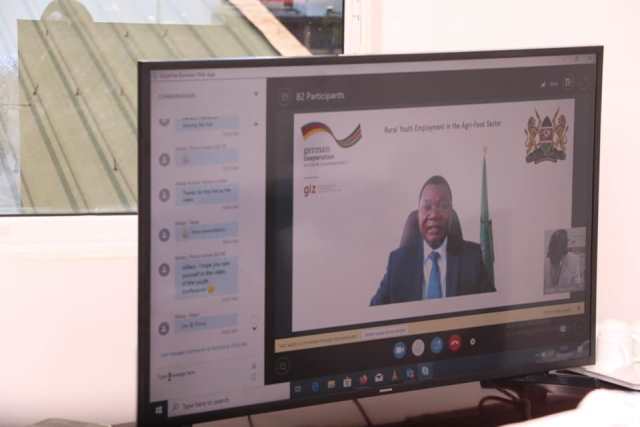 The project that will be implemented by GIZ focusses on key areas namely;

✓How County Governments are addressing inclusion of youth in Agribusiness.

✓Programmes in the counties that encourages participation of youths in Agribusiness and;

✓The strategies by counties towards domestication and developing youths in Agribusiness.

Speaking from his office at the county headquarters during the Virtual Launch, Kakamega deputy governor Prof. Philip Museve Kutima who spoke on behalf of the other CECMs from the other four counties said the County Government of Kakamega as well as the LREB is working around the clock to gainfully engage youths in various fields especially in that of agri-preneurship.

“Youths unemployment continues to pose a huge challenge in this region that relies on Agriculture by over 80%,” Prof. Kutima said to the over 70 participants drawn from Germany, Nairobi and the five LREB counties.

He said LREB counties have enhanced technical capacities to empower the youths such as the County Youths and Empowerment Programme and ATVET programme in county polytechnics.

“Youths in our counties are also given opportunities to participate in decision making through their representatives who seat in the County Agriculture Sector Coordination Committee,” he added.

Counties like Kakamega, Prof. Kutima noted, have also established a Micro Finance Corporation that will lend youths in agri-preneurship at very low rates to spur investment in agriculture as a business.

The deputy governor who also doubles up as the CECM for Agriculture, Irrigation, Cooperatives, Veterinary and Livestock services in Kakamega County thanked the German government for continued partnership and called on the youths to take up Agribusiness as an investment.

Other participants were members of the Civil society & Development partners, Research institutions and the Private sector.