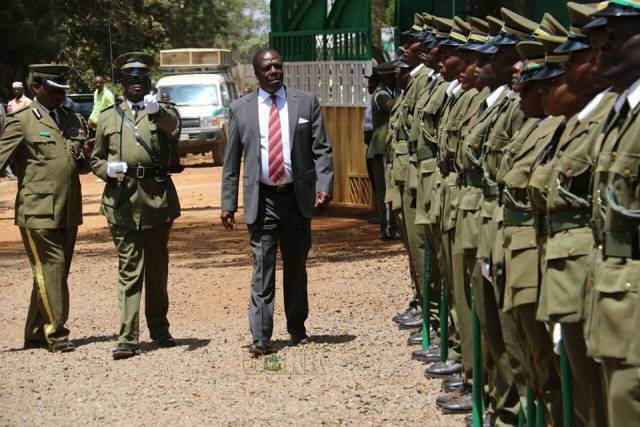 H.E Governor Wycliffe Ambetsa Oparanya has officially opened the second session of the second county assembly paving way for a rigorous business in the house by the second assembly.

The Governor once again congratulated the honourable members for their election and nomination into the house calling for a close and harmonious working relation between the Executive and Legislative arms of Government for the benefit of the public.

H.E Governor Oparanya reiterated his resolve to transform the living standards of Kakamega County residents through transforming the Agricultural sector to improve productivity, Developing infrastructure to trigger economic growth, Transforming the county health services to ensure affordable access to health and Transforming the education sector to equip young people with relevant skills and knowledge. The Governor as well mentioned other pillars in his manifesto as; Strengthening of the devolution, Acceleration of ICT development, Development of a water and sewarage Master Plan, Lighting of all urban areas and Creation of a supportive and competitive environment for businesses.

He expressed optimism that the National Government, County Governments’ and development partners will work together to address the gaps experienced during the earlier stages of the devolved system of governance. However, he decried the continued delay in disbursement of funds to counties noting that for the last four months the National Treasury has not remitted monies to counties. The same, he said, will lead to delayed payment of salaries to staff and stalled projects.

Governor Oparanya announced that his recently restructured Ministry of ICT, Communication and E-Government will play a key role in ensuring the county fully utilizes ICT skills and expertise to reduce cost and rampant theft of Government revenue. In the same breath he announced that the soon to be introduced cashless revenue collection system, Introduction of an e-citizen platform to ensure online payment of Government services and the establishment of a service delivery unit under the Office of the Governor are some of the measures he has taken to ensure proper supervision and project implementation by his government. He urged the honourable members to prioritise bills lined up for debate in the house terming them key for the economic prosperity of the county.

The Governor wound his speech by announcing that Kakamega County will host the prestigious Council of Governors’ organized Annual Devolution Conference in April this year. He also expressed optimism that Phase 1 of the Kakamega Teaching and Referral Hospital will be commissioned this year and urged the honourable members to sensitize the public about the facility during their meet-the-people tours.

Kakamega County Assembly Speaker Hon. Morris Buluma thanked the Governor for his visionary leadership as he serves his final term.