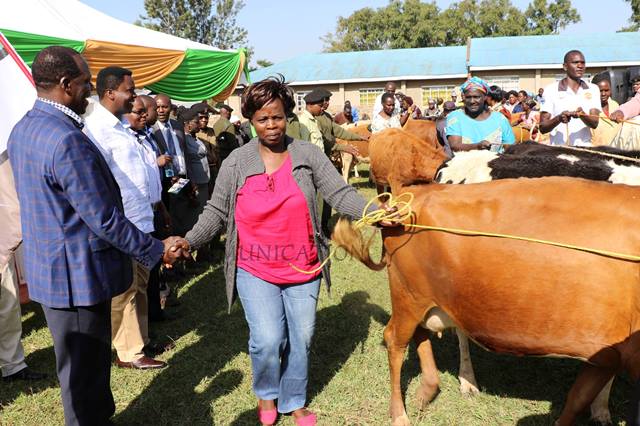 Kakamega Governor Wycliffe Ambetsa Oparanya has reiterated that the development agenda he set for the county as spelt out in his manifesto is headed towards the right direction.

The Governor was speaking at Eshisiru grounds during the second phase distribution of cows to women farmers in Lurambi Sub County. He lauded the support he has so far received from residents of Kakamega despite the numerous challenges occasioned majorly due to the irregular flow of funds from the National Government.

He noted the gains realized in the various sectors and in particular the health sector which has seen a high reduction of maternal deaths in the county after the introduction of Afya ya Mama na Mtoto program popularly referred to as ” Oparanya Care” among other measures initiated by the government to improve health care in the county. The “Oparanya Care” Midterm Review that ended yesterday, he said, has indicated a significance reduction in maternal deaths and other complications related to child birth since the program was initiated.

Later on today, the Governor joined mourners at the home of the late Hon. Francis Obongita at Malaha Village, Mumias East Sub County. The late Hon. Obongita served as a Member of Parliament of the then Mumias Constituency. Governor Oparanya fondly recalled earlier moments with him when the late legislature led a delegation of Wanga elders to his Butere home and requested him (Oparanya) to vie as a Governor of Kakamega. He donated three bulls to be slaughtered during the funeral, as part of his contribution to the family. The late Obongita will be laid to rest at his Malaha home tomorrow (27th May, 2017).