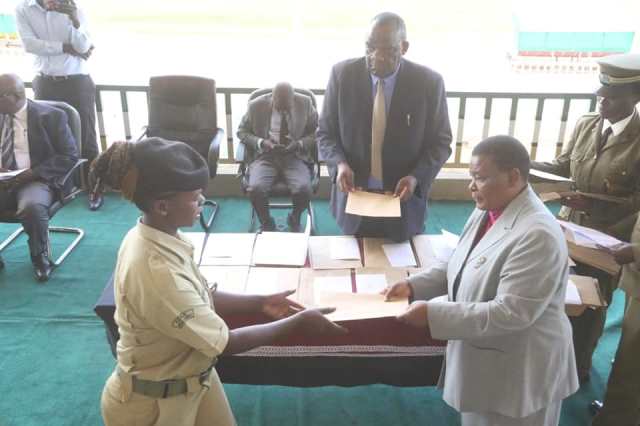 Two hundred and seventy six (276) Kakamega County Enforcement Officers have been issued with letters of promotion marking the beginning of a promising future for the 314 in total, Government disciplined officers with regards to career growth and progression.

Presiding over the ceremony on behalf of H.E the Governor Dr. FCPA Wycliffe Ambetsa Oparanya Tuesday at Bukhungu International Stadium, the CECM for Public Service and County Administration Mrs Rachel Okumu thanked her boss for initiating and equipping the Enforcement Unit with requisite training and resources enabling them to effectively carry out their mandate of enforcing law and order in the county in collaboration with the national agencies where necessary.

“This is a significant milestone that gives hope, inspiration and motivation to the officers during their service to the public since the scheme of service has been revised,” she stated and called for discipline from the officers, challenging them to enhance collection of revenue through proper law enforcement mechanisms.

reminded them to adhere to the rule of law and regularly appraise their forms so as to guide their ensuing promotions.

Amb. Ochami explained that the Government is a going concern and instructed the officers to discharge their duties confidently despite this being an electioneering period.

Chief Officer for County Administration Col (Rtd.) Job Akhulia challenged the team to genuinely acquire requisite qualifications required for further promotions adding that such advancement is strictly meant for qualified and deserving officers. His Counterpart at the Public Service docket Dr. Boniface Mudi observed that in addition to Enforcement Officers, promotions of other County Government staff is in top gear.