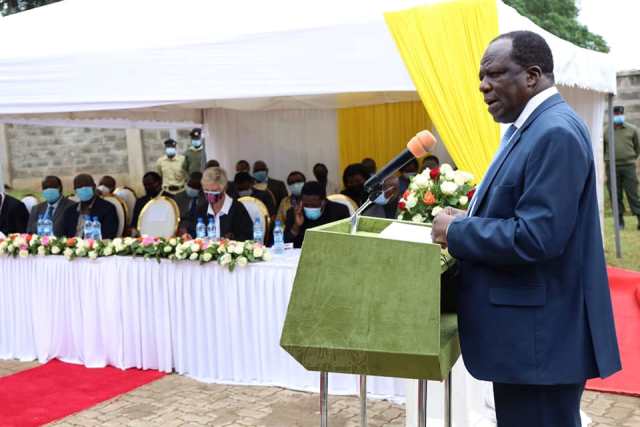 Diversification of Agriculture is a key objective of the County Government of Kakamega being implemented by the Department of Agriculture, Livestock, Cooperatives and Fisheries to improve food and nutrition security, health and create employment among the local populace. To realise this, the Government has been diversifying the sector to other enterprises which include Fish farming, Livestock development, Poultry and Cooperative support.

Speaking during the colourful event, Governor Oparanya said the visit by the Amb. cements partnership with the County Government of Kakamega further promoting the bilateral relations between Kenya and the European nation. The Swedish Government through the Swedish International Development Agency (SIDA) has over the years supported the Agriculture Sector Development Programme (ASDSP), a programme that supports three value chains of Maize, Dairy and Poultry.

The Processing Plant that begun operations this month has a capacity of processing upto 30 metric tons of fish in a day. Kakamega has a high potential for Aquaculture in Kenya with 6,976 fish farmers and 9,988 fish ponds. This has a potential to produce a total of 1,798 metric tonnes of fish in a seven month production cycle.

“The County Government appreciates our partners, the National Government through the Economic Stimulation Programme (ESP) and the DAS Group Kenya Limited, for investing over Kshs. 40 million (DAS) to upgrade this facility to ensure it meets all the requirements qualifying it to export fish to the much-coveted European Union (EU) market,” the Governor said adding that the factory will address the challenges faced by fish farmers in marketing of their fish.

Kakamega County, the Governor announced, will soon set up a fish feeds warehouse for production of the feeds.

Through various strategies among them providing fish feeds subsidies, employing extension officers and strengthening the Cooperative movement, the County Government has steadily enhanced the growth of aquaculture in Kakamega; recently the County was awarded with a certificate as the best Aquaculture County by the Aquaculture Academy.

The Swedish Ambassador and Chief Guest Madam Caroline Vicini said the European Union (EU) has a stringent criteria on its importations especially on foodstuffs and expressed her delight that the Kakamega Fish Processing Plant meets the required standards of exports to the EU.

Devolution Cabinet Secretary Hon. Eugene Wamalwa thanked Governor Oparanya for providing steady leadership and revealed that through partnership with the National Government, Kakamega County will soon be home to the first Gold Refinery plant in the Country at Ikolomani Sub-County.