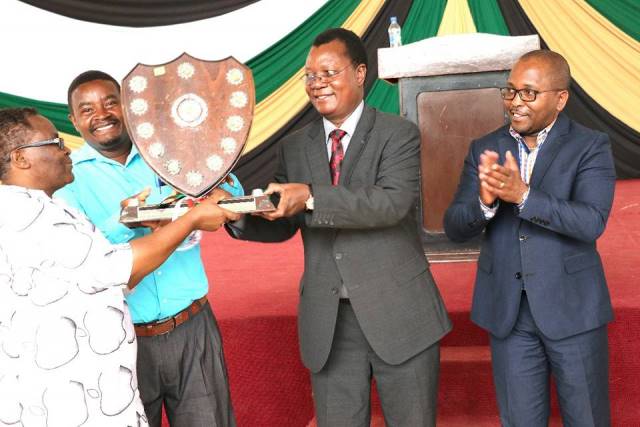 Kakamega County, the reigning Kenya Music and Cultural Festival champions has retained the trophy for the fourth time in a row. The County has won the trophy since the inception of devolved governance system in 2013.
Speaking today during this year’s festival gala concert at Masinde Muliro University of Science and Technology (MMUST) auditorium, Kakamega County Deputy Governor Prof. Philip Kutima thanked the organisers, participants and all the stakeholders for making the event colorful and successful and urged everyone to remain committed to this year’s theme of national values, cohesion, intergration and cultural tourism. The Deputy Governor also appreciated other counties for their unique talents in Music and culture performances. He however warned of Kakamega’s endless thirst to lead the pack in all the National Music and Cultural Festivals.
Professor Kutima conveyed Kakamega Governor Wycliffe Ambetsa Oparanya’s apologies as he was held up at the Council of Governors meeting in Nairobi.

Director of Culture at the Ministry of Sports and the Arts Dr. Kiprop Lagat represented Cabinet Secretary Hassan Gurach Wario.