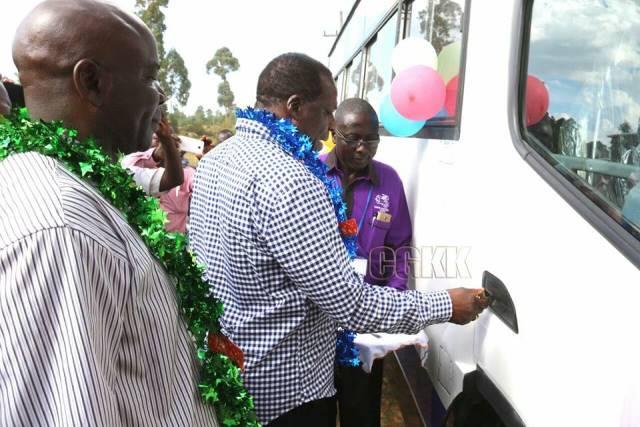 At Chekalini Ward, after inspecting construction works at the Kipkaren modern market, the Governor revoked the contract of the current incharge contractor whom he termed as an enemy of progress due to the slow progress of the market construction. The Governor cautioned government officers employed to serve at the grassroot levels against sleeping on their jobs and instructed them to report on a timely basis cases of incompetence among contractors who have been entrusted by the government to deliver life transforming projects to the residents.

The Governor also commissioned the construction of Lumakanda Junction – Lumakanda Town Road to bitumen standards where he observed that the road, once completed, will serve as an essential connection between the two counties of Kakamega and Uasin Gishu to assist in growth of the residents socio-economic livelihoods.

On the political front, Governor Oparanya called on Kakamega county residents and NASA supporters country wide to rally behind Hon. Raila Amolo Odinga’s much awaited decision slated for 12th December and added that the former premier’s quest to deliver the nation from Jubilee government’s injustices is still achievable if he receives maximum support from Kenyans.

He wound his tour by presenting a Mini bus to Lugari Bodaboda Cooperative Sacco members at Lugari grounds where he encouraged residents engaged in businesses to form cooperative societies as a way of boosting their economic lives. He also announced the partnership between the County government and the Kenya Medical Training College (KMTC) – Nairobi to construct three colleges in the three regions of Kakamega County (Northern, Southern and Central) to offer medical training of those students from the various sub counties of Kakamega. The Governor announced that already the county government has committed 50 million shillings for infrastructural development at the Kenya Medical Training College – Lugari campus.

Other leaders who accompanied the Governor were Deputy Governor H.E Prof. Philip Museve Kutima, Lugari MP Hon. Ayub Savula, CEC members and Members of the County Assembly from Lugari sub county among others.