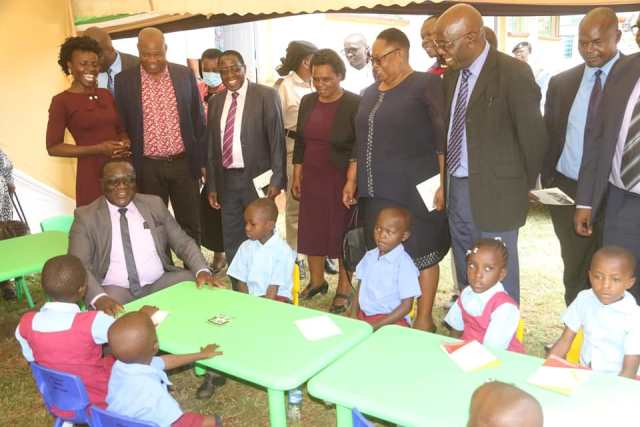 Teachers of Early Childhood Education Centres (ECDE) in Kakamega County will from July 2022 be employed on permanent and pensionable terms by the County Government. A scheme of service has been developed by the County to also ensure the already being implemented reviewed terms of County Polytechnic Instructors remains sustainable.

This was revealed by the County Executive Committee Member (CECM) for Education, Science and Technology Dr. George Akolo Lutomia Thursday afternoon on behalf of H.E the Governor Dr FCPA Wycliffe Ambetsa Oparanya when he flagged off County procured ECDE furniture to all the twelve Sub-Counties at a function conducted at the Kakamega Social Hall.

In the Governor’s speech read by the CECM, Dr. Oparanya said his Government has so far spent Kshs 530 million on development of infrastructure in the County to ensure pupils learn in a conducive environment.

To address the staffing challenge in the ECDE and Polytechnic centres, the Governor explained, the County has so far employed 2,016 teachers and 369 instructors respectively adding that the process of recruiting more is ongoing.

“Beyond ECDE and TVETs, the County Government has also invested a lot in educational infrastructural development in both primary and secondary schools. This has not gone to waste as Kakamega County has led in KCPE examinations for five consecutive years,” the Governor’s speech read.

The Chairman for Education Committee at the County Assembly Hon. Dickson Ombayo lauded Governor Oparanya for his visionary leadership and assured that the Assembly will continue cooperating with the Executive in transforming the lives of residents.