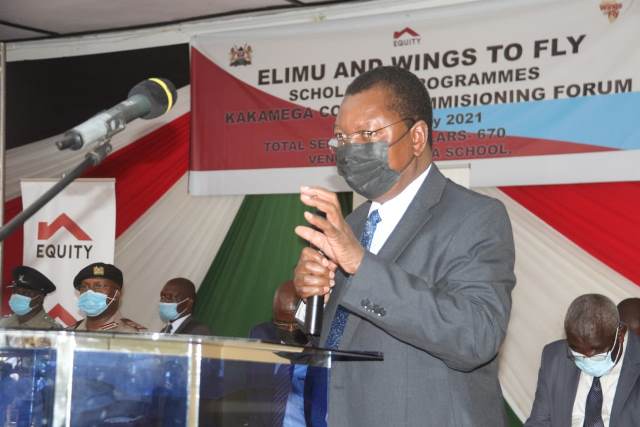 Speaking at the event, Prof. Kutima expressed his appreciation to the Equity Foundation for supporting bright and needy learners adding that many students, not only the citizens of Kakamega County but covering the entire country, have benefited from the initiative.

The Deputy Governor noted that the County Government of Kakamega through the able leadership of H.E. the Governor DR. FCPA Wycliffe Ambetsa Oparanya has invested heavily in the education sector through infrastructure development, the County HELB loan program, Ward Based Bursaries among others with aim of improving the standards of education in the County.

He revealed that since inception of devolution in 2013, Kakamega County has produced top candidates in national examinations for four consecutive years (2015, ’16, ’17 and 2018) a factor he attributed to the massive support given to the education sector by the County Government of Kakamega.

“Both the Government and other stakeholders must work together to uplift the less privileged bright students in this country; the efforts from partners like Equity Foundation have to be supplemented to ensure children from needy backgrounds get access to quality education,” he said.

Prof. Kutima however challenged the beneficiaries to leverage on this rare opportunity provided to them by excelling in their studies without looking back at their backgrounds.

Equity Group CEO Dr. James Mwangi said Kakamega County has received the highest number of scholarships out of the 7601 applications recorded adding that 670 students were selected after a thorough and rigorous process conducted by the Program’s Committee in all the 12 Sub-Counties of Kakamega.

The Wings to Fly scholarship program by the Equity Foundation and other partners was established to support secondary education for top performing children from financially challenged backgrounds. It offers comprehensive support for the scholars through provision of tuition fees, accommodation, books, uniform, shopping, pocket money and transport to and from school during their four years of secondary education. The program has so far supported 26,304 bright but economically challenged scholars.

Kakamega County Commissioner Madam Pauline Dola encouraged the students to portray high levels of discipline and commitment and called on them to be good ambassadors of the County.

The CECM for Education, Science and Technology Dr. George Akolo Lutomia on his part said that the program has brought hope to children from humble backgrounds.

The students were later awarded with the Scholarship letters.