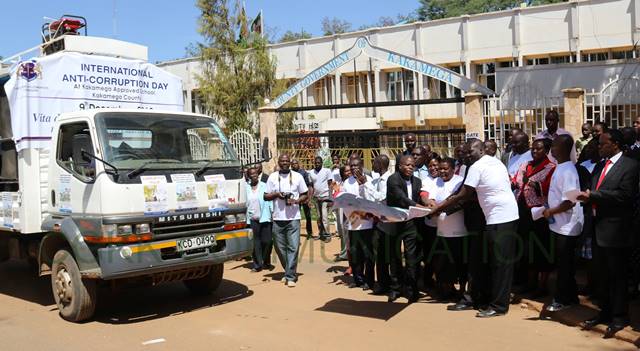 The County Government of Kakamega in conjunction with the Anti-Corruption body EACC launched the ‘Kakamega County Anti Corruption Sensitization Campaign’ at the county headquarters. The campaign seeks to change the attitude of residents on corruption matters.

Speaking during the function, CECM Public Service and Administration Rachel Okumu reiterated the government’s commitment to fighting the vice. She also passed H.E Governor Wycliffe Ambetsa Oparanya’s message where the Governor observed his government has prepared a leadership Code of Conduct approved by the EACC, gazetted, and is now with the County Assembly. Governor Oparanya expressed his resolve to fight corruption and ensure the county government officers observe high integrity values and termed the corruption policy developed by his government as the way forward towards setting up proper systems to prohibit and curb and corruption in the county.

Kakamega County Commissioner through his representative Mrs. Elizabeth Atemi, urged the residents to fix corruption as it denies the hardworking Kenyans of integrity immense opportunities.
Kakamega County Assembly Speaker Hon. Morris Buluma called on all public servants to be on the lookout and expose any elements of corruption within the system.

Kisumu County EACC Deputy Director Ken Murayi acknowledged the efforts made by Kakamega County Government in war against graft and encouraged the public to report cases of corruption and seek services related to matters corruption from government offices at no fee.

The county will mark the Worlds Anti-Corruption Day this Friday, 9th December 2016 at Approved School where ten governors from the larger western region are expected to attend. Environment Cabinet Secretary Prof. Judy Wakhungu will grace the function.