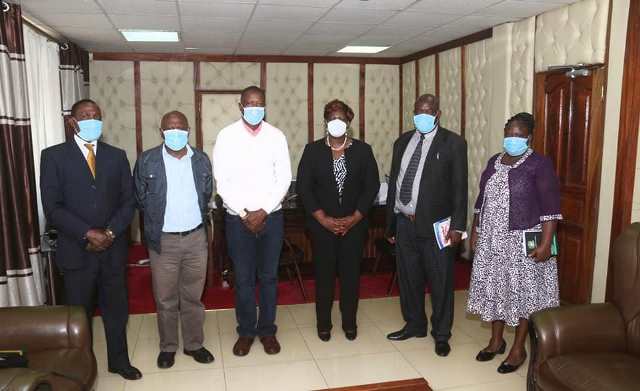 Kakamega County is on the verge of entering into a partnership with USTADI Foundation and Eden Oils Limited to enhance production and marketing of soya crop in the County.

This was revealed Monday afternoon during a meeting between senior County Government officers from the Departments of Finance, Agriculture and Trade with officials of the two European Union funded NGOs’ at the Chambers Hall, County Headquarters. Eden Oil Limited processes edible oil while Ustadi Foundation focuses on capacity development for enterprise support particularly for youth and women enterprises.

The CECM for Finance, Planning and ICT Dr. Beatrice Sabana expressed her delight of the program and promised to support the partnership saying it will boost the well being of farmers. Residents of Kakamega County, she noted, depend on agriculture as their main economic activity.

Finance Chief Officer CPA Amb. James Ochami said with the existence of operational and vibrant Cooperative societies in the County, the partners should consider identifying farmers from the cooperatives as a way of supporting their activities. Eden oil is currently relying on raw material from Uganda and Tanzania and has in the recent times faced challenges of importation restrictions.

Amb. Ochami’s counterpart at the Planning and Investment docket Mr. Lawrence Omuhaka on his part reiterated the need for the project to begin on time and assured the investors that his department will facilitate a seamless cooperation between the investors and farmers.

The Chief Executive Officer (CEO) of the Kakamega County Investment & Development Agency (KCIDA) Mr. Joseph Indire said the partnership will go along way in boosting the County’s agricultural sector and economic well-being of farmers. He thanked the two partners for picking Kakamega as one of their counties of investment. The others are Kilifi, Kitui and Busia.

“As the Agency that is mandated with promoting investment, we will work closely with you to ensure success of this project in accordance with our mission of coordination and facilitation of investment in the County,” he said.

According to the CEO of USTADI Foundation Mr. George Mazuri, the two organizations will be supporting 2000 select farmers with seeds and other farm inputs in addition to educating them on the best practices in growth and development of the crop.

“This program will run for 24 months of four seasons, the initial number of 2000 farmers will gradually increase depending on the performance,” he said.

The Ministry of Agriculture, Irrigation, Co-operatives, Livestock and Fisheries was represented by Mr. Titus Omengo, the County Farm inputs officer, who said the project will leverage on the presence of Agricultural extension officers across the County to identify, mobilize and train the farmers on the project.

Ag. Deputy Director KICDA Madam Elizabeth Asichi led the team for a visit to the Kenya Agricultural & Livestock Research Organisation (KALRO), Kakamega, where they identified the most suitable variety of soya seed for Kakamega County, the SB-19 seed.

Present also were Head of Trade Madam Deborah Munyekenye and the Head of Programmes at Ustadi Foundation Mr. Eric Bosire among other officers.