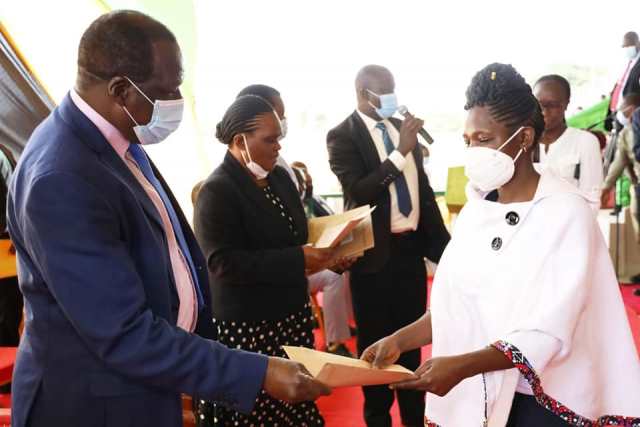 In an effort to enhance service delivery in the health sector in Kakamega County, the County Government has recruited 61 new health workers among them registered nurses, clinical officers, medical laboratory technologists and nutritionists. In addition, the recruitment process of 90 more nurses is set to be begin after which the recruits will be deployed to various Level lV health facilities across the County.

Kakamega County Governor H.E Dr FCPA Wycliffe Ambetsa Oparanya Monday afternoon at Bukhungu Stadium, Kakamega, issued the new officers with appointment letters and directed the County Executive Member for Public Service and Administration Madam Rodah Masaviru to deploy them at the County Teaching and Referral Hospital with immediate effect. Their deployment, he mentioned, will fill the gaps of the striking health workers who have failed to report back to work despite efforts by the Government to have them return on duty.

“The Government is bringing you on board for a period of 3 years during which you will be expected to offer efficient health services to wananchi with respect to human life as stipulated in your professional oath ,” Governor Oparanya said.

The Governor noted that his administration has adequately addressed issues raised by health workers in the County mainly centred on promotions, allowances, provision of personal protective equipment (PPEs), insurance cover and training needs among others. He also used the opportunity to call on the striking health workers to resume duty without fear of being intimidated by their Union promising them of Government protection. The Union officials, he advised, should drop their hard-line stance and engage the County Government on how to end the strike.

“I am happy to announce however, that a good number of nurses have reported back to work in various facilities across the County; we will seek audience with the National Government to see to it that other issues touching on them (National Government) raised by the medics are addressed expeditiously,” Dr. Oparanya promised.

Deputy Governor H.E Prof. Philip Kutima on his part welcomed the new recruits in Government and implored on them to serve the residents diligently. He reminded them that public service is all about giving service to the public to the best of their knowledge.

The Chairperson County Public Service Board Madam Catherine Omweno exuded confidence that the recruited officers are men and women of integrity ready to serve the public and assured that the recruitment process was free and fair. Present also were Members of County Assembly led by the Deputy Speaker Hon. Leonard Kasaya, CECMs, Chief Officers, CEOs, Heads of Departments and County Administrators among other Government officers.