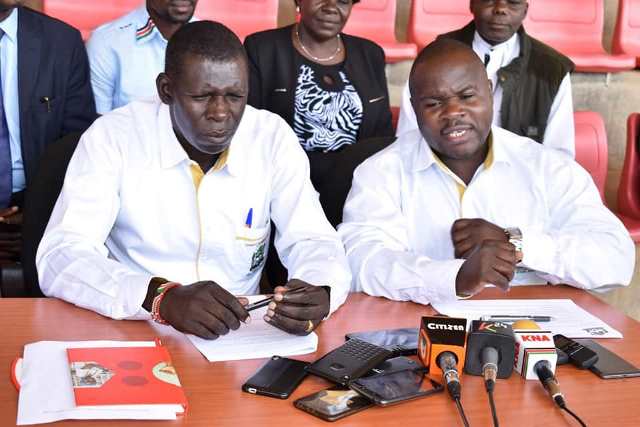 The Ministry of Social Services Youths, Sports and Culture together with that of Trade, Industrialization held a joint media briefing today in preparation for the upcoming Kakamega Cultural Festival slated for 27th-29th March 2020 at Bukhungu stadium, Kakamega. The three day event that will also feature “Churchill Show” as a guest perfomance on 28th has been organized by the Department of Culture in partnership with the Department of Tourism with the aim of; celebrating, showcasing and identifying the culture and talent of Kakamega people, according to the CECM Hon. Robert Makhanu.

Some of the activities to be showcased include fashion show, elocutionary perfomances, traditional dances and wrestling among others. There will also be a-Childrens’ corner- to enable the young ones enjoy and learn about the culture of Kakamega people.

“We are however cognizant of the threat posed by the dreaded corona virus now that the first case has been reported in Kenya and we remain hopeful of holding a successful event if given the greenlight by the ministry of health,” County Secretary and Head of Public Service, madam Jacinta Aluoch Odhiambo said.

Hon. Makhanu said that it will be the first time ever the County will be hosting such an event and welcomed all participants for the extragavanza. The popular Luhya dance “Omutibo” night will also be on the card as well as Busaa corner, bull fighting, Ingokho feast and wrestling.

CECM Trade, Industrialization and Tourism Mr. Kassim Were on his part said inviting Daniel Ndambuki of Churchill Show to stage his show in Kakamega during the cultural festival is a welcome idea and announced that Kakamega is fast joining the ‘big boys’ league as a tourist destination.

“Culture and tourism are like co-joined twins and we would like to urge everyone to come and celebrate our culture with us and also get a chance to visit the various tourism attraction sites in the county,” Mr. Were said.

The County Secretary used the platform to announce that the Ministry of Health services has already set aside an isolation wing at Kakamega County General & Referral Hospital for coronavirus screening and treatment.

The two ministries will be holding joint talent search forums from 17th-20th of March. TAC Hall, Lumakanda, Lugari sub county will host the Northern region meeting on 17th &18th as Mumias Cultural Centre hall plays host to the Southern region meet on 19th. Kakamega Social hall, Kakamega town will host the third and final round of the meetings on 20th in the Central region.