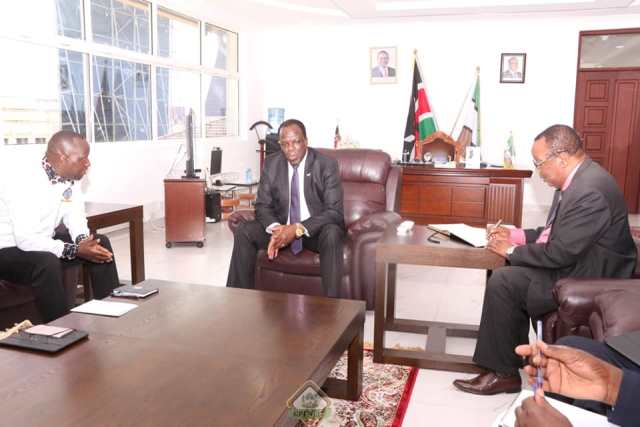 The governor made the remarks in his office at the County headquarters when top officials of Kenya Literature Bureau led by the chairman of the Board, Mr. Francis Baya and the Managing Director, Mr. Victor Lomaria.

The duo presented His Excellency with sample text books for primary school learners saying that Kakamega County was their leading customer among devolved units with business worth over Shs88 million in the past two years. This represents over 80% of business transactions with four counties, including Kakamega, over the period. Others are Vihiga, Nandi and Uasin Gishu.

Governor Oparanya said his Administration had made a decision to consolidate its printing requirements and select a competent government printing agency like Kenya Literature Bureau to undertake the business at hugely discounted rates.

“We process our bills fast through the IFMIS system, so you won’t be bogged down by delayed payments,” he said.

Mr. Lomaria expressed gratitude to the governor for demonstrating commitment to enhancement of the youth’s education which resonates with the KLB’s core business.
“It is for this reason that we offer up to 25% discounts to major customers in the public sector,” he said.

He added that his organization had signed an MOU with Kakamega to train 2,000 teachers and the programme is due to commence within one month.