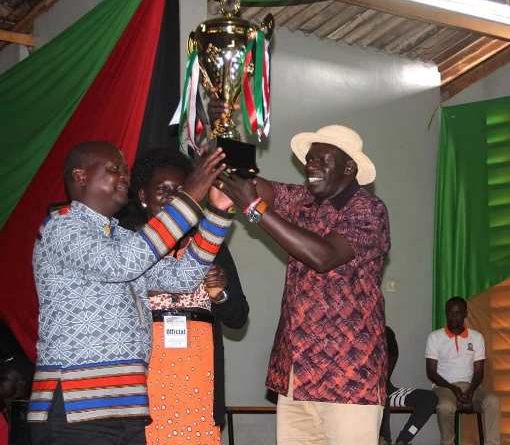 The Ministry of Social Services, Youths, Sports and Culture has earnestly begun the process of organizing the first ever Kakamega County Cultural Festival slated for later this Month.

Today, senior officers from the ministry led by the CECM Hon. Robert Makhanu held a day long meeting with key stakeholders from across the county to plan for the event at the ministry offices at Bukhungu stadium.

The stakeholders included representatives of the Council of Elders, the Youths, Inter Faith, Women, Circumcisers, Fine Artists, Herbalists, representatives from the offices of the senator and the area Member of Parliament as well as ward administrators among others. Representatives of various communities living in Kakamega such as the Nubian, the Agikuyu, the Luo and the Hindu communities were also in attendance.

In his opening remarks, Hon. Makhanu said the cultural festival will offer a great opportunity to the residents to showcase their rich cultural practices and enlighten them on the need to jealously guard their cultural heritge and traditions. He said with the fast changing world, some aspects of culture and traditions are gradually becoming extinct and called on all the communities within Kakamega County to reach out to the organizers of the event through their respective Community Area Administrators and Ward Administrators for a chance to participate in the main event.

“Through this event that will now be celebrated annually, as the residents of Kakamega, we will learn to embrace each other’s culture and traditions as we embrace our cultural diversity’’ he said.

The objectives of the cultural festival are to showcase the rich cultural diversity of Kakamega people, to recognize, appreciate and celebrate the culture and achievements of Kakamega people, to provide opportunities for the creative economy sector to grow and to stimulate growth in cultural tourism among others. Some of the activities to be showcased include; traditional dances and music, contemporary on the music, elocutionary performances, exhibitions of traditional medicine and food, traditional games and a children’s corner.

Director of Culture Madam Gaudencia Otipa said the event will be used by the ministry in collaboration with other stakeholders to select Kakamega County’s Mr. and Miss Cultural Ambassador who will represent the county in the national and international competitions. She was flanked by other officers from the department of Culture.

Kakamega residents are encouraged to register with the ministry of Social Services, Youths, Culture and Sports, on time, for a chance to represent their respective communities.