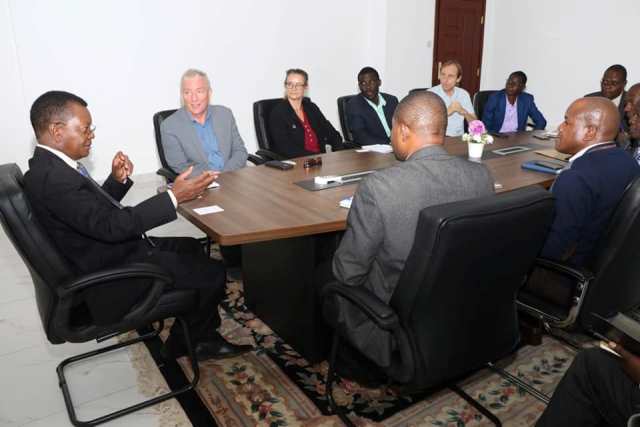 Kakamega deputy governor H.E. Prof. Philip Museve Kutima has called on farmers in the county to quickly register for the Kakamega County Government subsidized farm inputs-fertilizer and maize-that will be distributed from the ward offices.

The deputy governor who also doubles up as the CECM for Agriculture, Irrigation, Cooperatives, Livestock services and Fisheries was speaking today at the County headquarters, when he hosted the new team leaders for GIZ programmes in Kakamega county.

The programmes are Green Innovation and Soil Protection & Rehabilitation.

“We have started receiving the first batch of the 200,000 bags of maize and fertilizer from Mavuno Company that will be distributed to all the ward offices in the County where the duly registered and deserving farmers will pick them from,” the deputy governor said.

Prof. Kutima also welcomed the new team from GIZ to Kakamega saying the partnership between GIZ and the county government has led to great benefits to farmers across the county. The organization, he said, has trained graduands in horticulture, dairy farming and acquaculture, adding that it played a key role in formulating key policies in the agricultural sector in Kakamega County.

The deputy governor also used the forum to announce to residents and farmers that they will pay for 60% of the total cost of the inputs for a single bag of maize or fertilizer as the county government absorbs the remaining 40% cost for them, unlike last year when the two shared the cost on a 50/50 basis.

“Before these products are handed over to farmers we will send agricultural officers to ascertain the size of land they own for farming purposes to guard against unscruplous people who might take advantage of the subsidised rates to buy from the government and sell to farmers at higher prices,” he added.

Prof. Kutima said the ministry has set aside a budget to combat any locust invasion in the county adding that officers have already been trained on how to fight the insects.

Also present were the Chief Officer for Agriculture Mr. Jeremiah Namunyu, senior officers from GIZ and Mr. Luke Otipo from the deputy governor’s office among others.