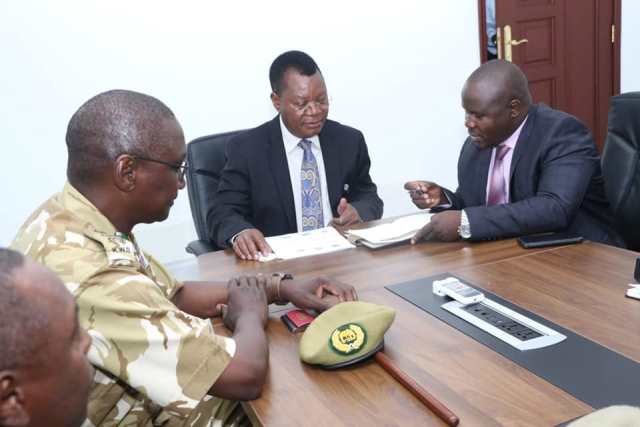 The Nairobi team was briefed on the ongoing plans to fence off Kakamega forest, an activity that is being spearheaded by the County governments of Kakamega and Vihiga and the National Government in collaboration with Rhino Ark.

Rhino Ark is a charitable trust that offers sustainable solutions to the threats facing mountain forest ecosystems in Kenya among other partners.

The hosts highlighted plans to introduce several tourist attraction sites in Kakamega forest such as the snake park, an animal orphanage and a cable train among others.

“We are glad the KWS team is here at last as we have been talking about some of these projects for years now with no much progress being made,’’ the deputy governor said. Prof. Kutima assured them of the full support of the County Government of Kakamega and in particular Governor Wycliffe Ambetsa Oparanya as they embark on the mission that will see Kakamega forest being licensed to be home to various species of birds, animals and reptiles.

The deputy governor also appealed to the KWS to assist the Kenya Forest Service, which guards the largest part of the forest, in conservation efforts to reduce further destruction of the forest.

The KWS director general said his organization will assign scientists to work closely with the County and later recommend the specific areas of engagement between the county government and the Kenya Wildlife Service before the animal orphanage project can kick off. He assured the deputy governor of the KWS support towards fulfilling the dream of having a good animal sanctuary and a snake park in the forest.

CECM for Trade, Industrialization and Tourism Mr. Kassim Were said the county through his ministry will soon embark on an initiative to protect and conserve all the heritage sites in the county such as the Hippo point along River Nzoia in Mumias, Mawe Tatu in Likuyani, Misango Hills in Khwisero and the Crying Stone of Ilesi, among others.