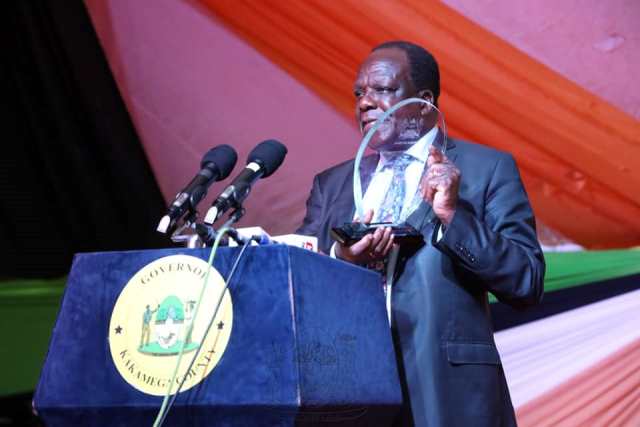 Arrival of the Governor at the stadium was followed by inspection of a Guard of Honour, wonderful drills display by County Enforcement Officers and a march past parade by Officers from all the County departments.

The event that was attended by select staff from all the County departments saw them interact and share light moments, during the luncheon, with each other as well as with other Senior Officers including Governor Oparanya who was the chief guest.

Kakamega County, as regarded by speakers who took to the floor, has become the leading epitome and destination on implementation of the devolved system of governance by her peers thanks to the firm working structures established by the Governor.

The CECM for Public Service and County Administration Rachel Okumu, a seasoned public servant for instance, said the wind of development and transformation has been blowing across the County due to the leadership and efficient coordination of County Government functions by Dr. Oparanya whom she said, has a grasp of every project and programme initiated in Kakamega County.

The Public Service Executive noted that remuneration of staff has been one of the priorities of Governor Oparanya’s administration, a factor that has enhanced service delivery due to an ever motivated workforce. Kakamega County Government has a staff establishment of 7,047 officers. The ability of the Governor to read and internalize a document within a very short time awed many of her colleagues, something that made them prepare adequately before knocking on his door.

County Secretary and Head of Public Service CPA Amb. James Ochami thrilled the audience when he said one could tell the mood of the Governor with the way he addressed you. For instance if he called you by your surname, then you be prepared for a dress down but if he referred to you by a christian name, he was in a good mood.

County Attorney Madam Vivianne Mmbaka, one of the youngest members of the County Executive, in her speech to the guests among them Kakamega County political leadership stated that the hardest hurdle for the County governorship aspirants’ is not becoming a governor; affirming the structures that the outgoing County boss has established will be the biggest test for whoever takes over as the County’s CEO, she said.

“In Kakamega County under Governor Oparanya’s leadership, l have come to believe that it is possible for anyone to rise above the ranks; for the Governor has valued and appreciated professionalism,” she said, amid a rousing applause from the staff. The rule of law, Ms Mmbaka noted, has been the guiding factor for Governor Oparanya in matters that seemed very complex.

On his part, Dr. Oparanya used the opportunity to extend his gratitude to all County Government staff for according him support during his two term tenure as the Governor and assured that his doors will remain open despite taking up other roles at the National level.

The Governor expressed satisfaction that he leaves behind a motivated workforce, all insured under NHIF cover. Kakamega County, he mentioned, is one of the few Counties that have not witnessed an industrial action on grounds of delayed salaries since inception of devolution.

He used the occasion to announce that the County was Thursday feted by President Uhuru Kenyatta during the Public Service week for effectively and consistently implementing perfomance contracting.

“This is not a farewell party but a review of the County 10 year scorecard by staff,” he explained and announced that staff who have stagnated will from the month of July move to the next job group, this is after the County developed schemes of service.

The platform saw some of the notable flagship projects and programmes in Kakamega County highlighted such as construction of Kakamega County Teaching and Referral hospital that will soon be handed over to the National Government for completion and operationalization, Bukhungu Stadium construction, Phase l is complete, a robust public service and establishment of key County corporations that have enhanced delivery of services and the Farm inputs programme that has boosted food security.

The event was also attended by First Lady Priscillah Oparanya, Members of Parliament from both the National and County Governments and Kakamega Gubernatorial and Senatorial candidates Hon. Fernandez Barasa and Brian Lishenga respectively among other invited guests.