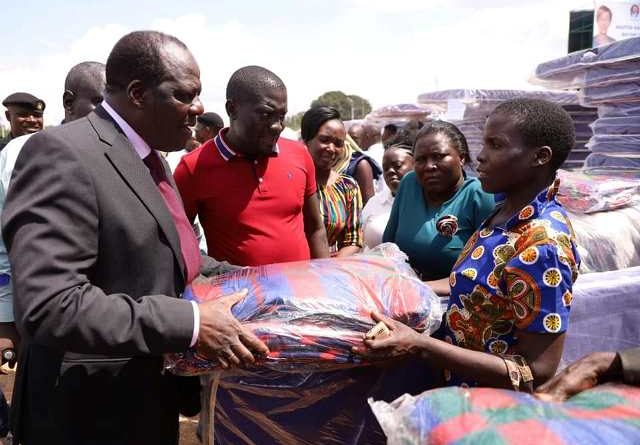 Seven Hundred and Twenty (720) less privileged residents of Kakamega County Wednesday received support from the County Government of Kakamega. The items handed over to the beneficiaries drawn from all the 60 wards in the County, by the Governor H.E Dr. FCPA Wycliffe Ambetsa Oparanya, included blankets and mattresses under the Shelter Improvement Programme and assorted assistive devices such as crutches, wheelchairs and sunscreens under the Support to Persons With Disabilities (PWDs) programme.
Speaking during the event, Governor Oparanya said the County has established Social Protection programmes to promote people’s welfare and give the vulnerable and elderly persons in Kakamega a decent living. The County, the Governor observed, carried out a disability census for the County to ascertain the actual number and status of Persons with Disabilities, an exercise that provided the demographic, social and economic characteristics of the PWDs.
The PWDs categories include; Physical, Visual & Hearing impairment as well as Albinism and Cerebral Palsy. The devices range from orthopedic devices, hearing and vision impairment devices, sunscreen lotion and sun protective caps for Albinism among others.
The launch of the Shelter Improvement marked the sixth phase of the programme where the County has constructed thousands of low cost semi permanent houses and given out mattresses and blankets to the beneficiaries.