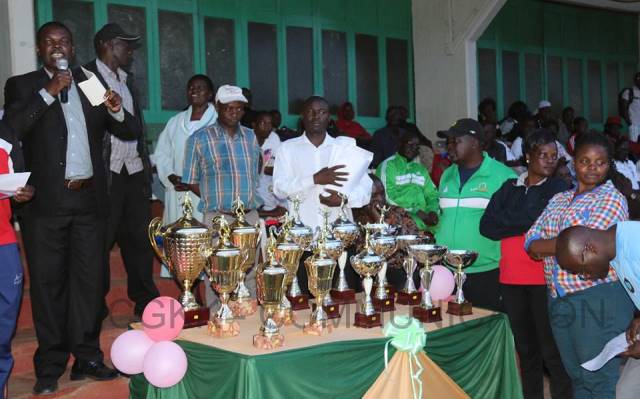 Curtains closed on the 2016 edition of the annual Kakamega County Governor’s Cup at the Mumias Sports Complex grounds on Sunday with Subcounties and individual sportsmen taking home prizes.

The tournament attracted a total of 38,500 participants in all the three disciplines namely Football men and Legball women, Volleyball men and women and Netball ladies.

Kakamega County Governor H.E Wycliffe Ambetsa Oparanya who was the chief guest was represented by CECM Robert Sumbi who urged youths to embrace sports to compliment their studies as it is a well paying venture if well tapped and nurtured. He called on the young generation to also embrace the spirit of sportsmanship and team work as a way of solving problems amicably in the society. The Executive Member asked the youths to shun involvement in drug abuse, premarital unprotected sex among other vices in the society.

In the ladies Legball, Matungu Subcounty were victors over Shinyalu Subcounty ladies as Providence Khasali from Likuyani Subcounty bagged the Most Valuable Player award. Bakari Tata from Mumias West took home a similar award in the male category.

In Netball, sharpshooter Hellen Sinoya took home the Most Valuable Player Award and steered Lurambi Subcounty to the title after beating Lugari in the finals. Khwisero Subcounty came in third after pushing Mumias East to fourth position.

The most disciplined team award went to Navakholo Subcounty.

Volleyball ladies/men and netball winners each pocketed a cash price of Shs.100,000 with runners up receiving Shs.75,000.

All the winners in Football, Legball and Volleyball will represent the county in a ten day Intercounty Sports Tournament to be held in Siaya County starting this Thursday 8th December.

The annual Governors Cup Festival aims at tapping and nurturing talents amongst the youth, fostering good community relations in the county, sensitizing the youths against abuse of alcohol and substance use and promoting the socio cultural diversities of the people of Kakamega County.