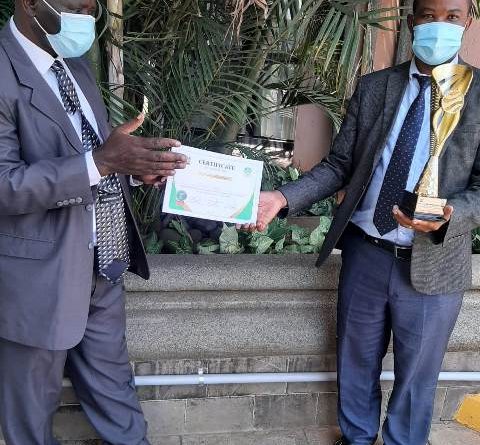 The County Government of Kakamega has emerged among the top Counties in implemention of Kenya Climate Support Agriculture Project (KCSAP).

Kakamega was ranked second after Nyeri County earning itself additional funding in the financial year 2021/2022 allocation which will be formalized in the due course.

Mr Jeremiah Namunyu, Chief Officer for Agriculture, Cooperatives and Irrigation who received the Award and trophy on behalf of the County said it is the first time for Kakamega to emerge among the top Counties since the inception of KCSAP in 2014.

“The Award follows results of successful fifth round project evaluation and review countrywide where Kakamega emerged second after Nyeri County,” said Mr Namunyu after receiving the trophy and Award at Crowne Plaza, Upper Hill in Nairobi.

The Award meeting was presided over by World Bank which appreciated the leadership of the County under the Governor H.E Dr FCPA Wycliffe Oparanya for the support and compliance to the negotiated guidelines.