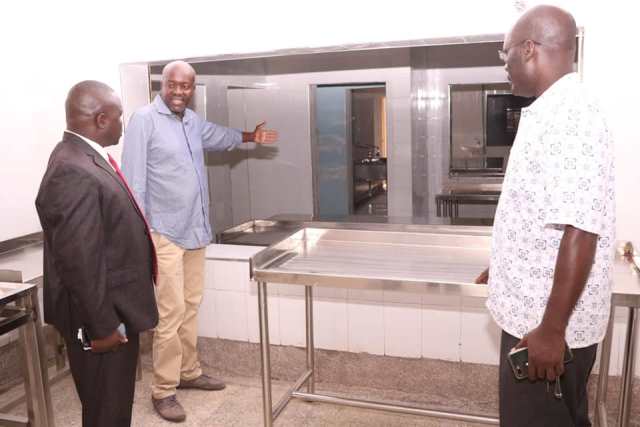 Kakamega County Government is slowly turning the dream of industrializing the County into a reality. The CECM Ministry of Trade, Industrialization and Tourism Mr. Kassim Were Wednesday afternoon visited the ‘’new kid on the block’’ on the industrial front in Kakamega, the upcoming Kakamega Fish Processing Factory at Lutonyi, Lurambi sub county, Kakamega County where he inspected ongoing construction works at the factory. The factory, that is set to resume operations in a month’s time, according to the investor, has a capacity of processing 5 tones of fish in a day.

“Fish farmers in Kakamega County now have a reason to engage in fish farming on a large scale because there is an assured market close to them,’’ Mr. Kassim Were stated after inspecting the facility. The factory, he said, will provide residents with employment opportunities and better nutritional value from the fish products. The CECM said the County Government through the Ministry of Agriculture has for several years now been engaged in farmer support initiatives such as subsidizing fish feeds and fingerlings, training farmers on fish farming through the government fisheries officers and finding market for their ready fish.

Mr. Were said the county government will continue partnering with the farmers to improve the quality and quantity of the fish in the county. Mr. Sam Ondiek, the investor, on his hand said the factory will also have a laboratory that will be used test the health of the product before processing.

The Chairman of the Kakamega Fish Farmers Cooperative Mr. Laban Mwanzo, an accomplished fish farmer who owns some of the largest hatcheries in the county also called on farmers to intensify fish farming terming it a very lucrative business venture. The Cooperative has 489 members who are all farmers and their main challenge has been a ready market for their product.