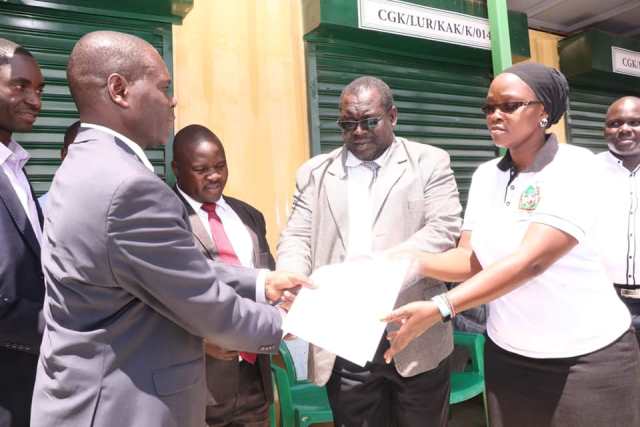 Mr. Kassim Were, the CECM for Trade, Industrialization and Tourism Wednesday afternoon handed over 50 newly constructed and branded County Government modern kiosks for Kakamega and Mumias traders to the Ministry of Lands, Urban areas and Physical Planning for allocation to the traders. Traders at Kakamega market will receive 30 kiosks as their counterparts in Mumias get 20 in the first phase.

Speaking during the official handover at Kakamega open air market, witnessed by traders led by their chairman Mr. Geoffrey Wanyama, the CECM assured them that despite the demolitions witnessed in Kakamega town recently, the County Government has put in place measures to ensure those affected by the demolitions get alternative and properly designated premises to carry out their business.

Mr. Were reminded the traders that the County Government sponsored some of their leaders to Rwanda for a benchmarking tour on how towns in the country are planned and managed during which they agreed on the need to replicate the system in Kakamega County. “What Governor Oparanya’s government is doing is not to punish anyone in this town but to ensure there is order, cleanliness and proper planning of our towns,’’ he said.

He thanked the new market committee for championing for the plight of the traders and announced that all government owned public toilets will now be managed by the municipal market committee. He called for transparency in allocation of the stalls and asked the traders to report incidences of favoritism and/or bribery during the process of allocation.