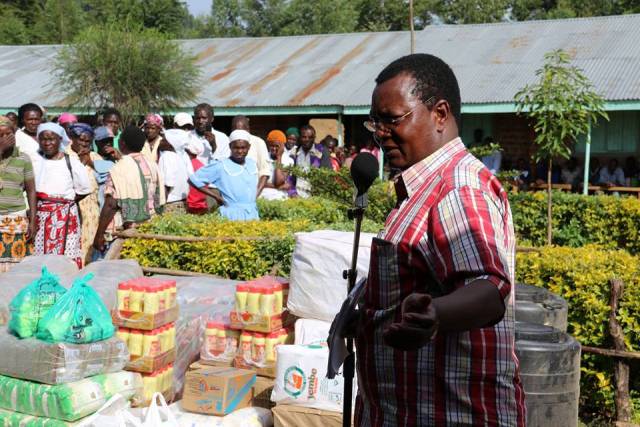 Kakamega County Deputy Governor H.E. Hon. Prof. Philip Kutima has asked residents living around Chepng’abai hill, at the boarder of Kakamega and Nandi counties, to stay away from their houses and seek for safety at their relatives or neighbors homes as the two Governments negotiate for a lasting solution to the mudslide disasters experienced in the area. Professor Kutima said this when he donated food stuffs, blankets and mosquito nets, medicine, etc, from the county government of Kakamega worth KSh.130,000 to support five hundred victims of Chepng’abai Hill mudslide that killed a woman and her four children the previous night.

Prof. Kutima thanked the National and County Governments Administrations,The Red Cross team, BOM Mukhuyu PEFA Primary School (where the victims are temporarily settled), Kenya Police and Nandi County Governor H.E Hon. Dr. Cleophas Lagat and his Deputy H.E Hon. Dominic Chepyagan for the selfless support that they have shown from the time the disaster occurred up to now.

The Deputy Governor ordered for the immediate relocation of the Beyond Zero Mobile Clinic from the county headquarters to PEFA Primary School to offer free health services to the affected families. He promised Kakamega County Governments’ support to the bereaved family of Mr. Phillip Ngaira so as to see that the bodies of his wife and the four children who perished in the mudslide are well kept at Kakamega General Hospital Mortuary until the time when they will be laid to rest peacefully.

Shinyalu Sub-County MP Hon. Anami Lisamula thanked both Kakamega and Nandi County Governments for their quick intervention immediately the news of the mudslide came out. He however asked the residents of both counties to continue living in harmony, as leaders work on mechanisms that will see them continue with their daily economic activities.