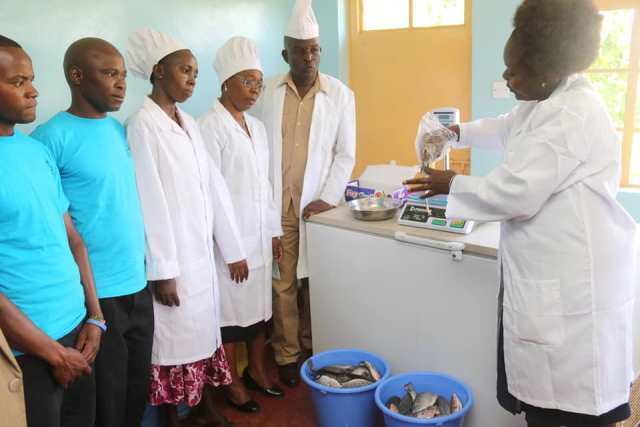 Fish farmers in Kakamega County have been relieved of the burden of looking for market for their products. This was revealed today by the Chief Officer Livestock Production, Veterinary services & Fisheries development Dr. Kelly Nelima during a stakeholders forum at the county fisheries offices in Lutonyi, Mahiakalo ward, Lurambi sub county in Kakamega County. Dr. Nelima said the County Government Kakamega has empowered Kakamega Fish Farmers Cooperative Society (KFFCS) to undertake marketing for the farmers who will now be required to sell their products to KFFCS at Ksh. 300 per kilogramme. KFFCS will in turn find market and sell the fish on behalf of the farmers. “As a county we are taking over the marketing aspect from fish farmers to ease them the load of both farming and finding market for their ready product and to encourage them to be more involved in fish farming,” she said. The Chief Officer added that the sector has been well funded by the county government including supply of free fish feeds to farmers. She however added that in future the farmers will be required to own the process by cost sharing with the county government. She said her ministry will soon introduce acquaculture training in county polytechnics.

Elsewhere, CECM Ministry of Roads, Public Works and Energy Dr. Collins Matemba today led his staff including two Chief Officers in signing ministerial performance contracts signalling a continuation of a process started between H.E. the Governor and the County Executive Members (CECMs’). At first the CECM signed the performance yardstick with his two Chief Officers; Roads & Energy Chief Officer Eng. Joseph Sweta and his Public Works counterpart Patrick Ligavo who after appending their signatures on the important document, also signed with their respective departmental heads. The heads further signed with the sectional heads in the various departments. The CECM challenged them to embrace team work, consult widely, ensure proper documentation and observe professionalism as they work towards implementing the Governor’s manifesto.