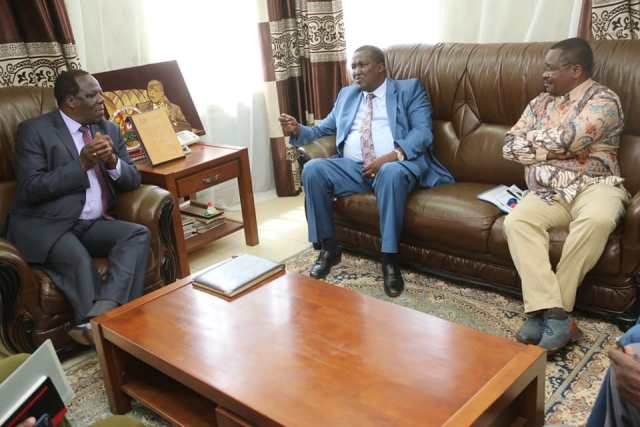 The County Government of Kakamega has set aside 5 acres of land for construction of a gold refinery in the county. This was announced today by H.E. Governor Wycliffe Ambetsa Oparanya during a mining stakeholders conference at Golf Hotel, Kakamega.

H.E. the Governor thanked Mining & Petroleum Cabinet Secretary Hon. John Munyes for personally finding time to attend the conference following a request to him by H.E. the Governor on the need to hold the conference in Kakamega county. “Gold mining activities are quite historical especially for the people of Ikolomani sub county who have for a long time now been engaged in mining. With the recent announcement of availability of gold in Ikolomani, it is important residents understand what mining is all about and how they stand to benefit from the same,” he said. The Governor said mining is a national government function but the county government and the community must be fully involved. He said with the Mining Act now operational, sharing of revenue between the two levels of government has been well interpreted and responsibilities of the county and national government made clear. The Governor added that mining should be open to several investors to encourage competition and timelines set for their prospecting.

Mining & Petroleum CS Hon. John Munyes said both county and national governments have come together to outline the legal framework so as to operationalize mining activities in Kakamega county. He said his ministry has decentralized mining to counties and was working with relevent bodies such as the National Land Commission and National Environmental Management Authority (NEMA) to fast track implementation of the activities. He called for public participation saying members of the community must be involved in matters mining and urged Members of the County Assembly to sensitize residents on the need to be involved. “Once the Gold refinery has been set up, 30% of ownership will be allocated to locals of Kakamega. I therefore encourage both local & international investors to invest in Kakamega,” he said. Once mining activities in the county are fully operational, the economy of Kakamega county will soon diversify from agriculture to mining, the CS said.

Also in attendance was Principal Secretary in the State Department of Mining Mr. John Omenge, Ikolomani MP Hon. Benard Shinali, Water, Environment and Natural resources CECM John Wangwe, Chief Officers and Members of County Assembly among other senior officials from both the county and national governments.