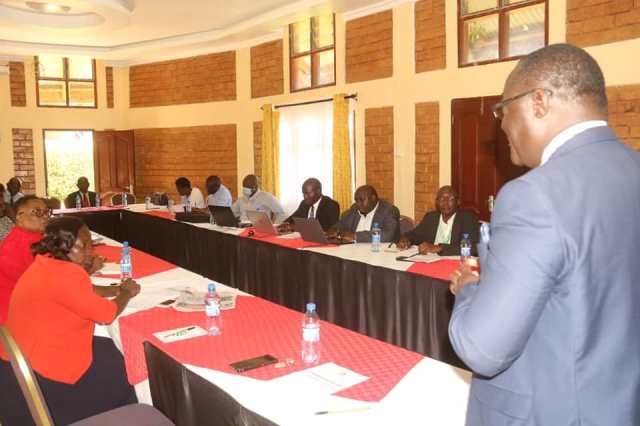 The County Government of Kakamega has set aside KSh 422 million to operationalize a scheme of service for Early Childhood Development Education (ECDE) teachers.

Additionally, the County has budgeted KSh 42 million to fully implement a scheme for County Polytechnic Instructors. This was revealed on Monday by the County Executive Committee Member (CECM) for Education, Science and Technology Dr George Akolo Lutomia during a consultative meeting between Ministry officials and members of the County Public Service Board.

Speaking while officially opening the meeting, Dr. Lutomia reiterated that terms of employment for the teachers will effective from 1st July, 2022 change from contractual to permanent and pensionable once the County Government finally implements the scheme of service that has been under review by various key stakeholders including Members of County Assembly, the County Public Service Board and the Council of Governors (CoG).

“We are now in the final stages of executing this noble scheme for our officers; the relevant stakeholders have been part of this process to ensure an all inclusive approach,” Dr. Lutomia said.

According to Madam Sylvia Otunga, the Chairperson of a County Taskforce developing the scheme of service, the County has aligned her draft document to a similar one already developed by the CoG. The devolved units body is advocating for a uniform document for all the 47 counties.

During the forum, the team also reviewed the financial implications of operationalizing the scheme.

The meeting was also attended by Members of the County Public Service Board led by Mr. Stanley Were, who represented the Chairperson Madam Catherine Omweno, Chief Officer for Education Madam Doreen Amwoga, Directors, among other Senior County Government Officers.