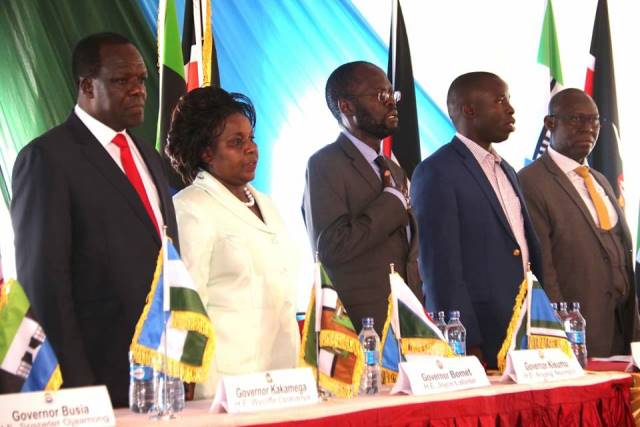 LREB Chairman and Kakamega County Governor H.E. Wycliffe Ambetsa Oparanya who read the day’s resolutions said member counties had resolved to undertake intensive sensitization campaigns in member county assemblies and residents on the importance of the bloc. The counties will establish a strong legal and institutional framework to guide the operations of the bloc with focus on cross border flagship projects such as formation of a commercial and development regional bank to serve the residents, conservation of the Mau Forest, promotion of maritime services, revival of the Sugar industry and coordination and planning of resources to provide improved service delivery in member counties among others. The 14 governors have scheduled an urgent meeting with the national government to address the challenges facing the Sugar industry.

Governor Oparanya added that the LREB will work with relevant institutions in formation of the regional bank, such as, Central Bank of Kenya, Treasury, Controller of Budget and Auditor General among others. Once operational, the bank will empower youths, women and the marginalised in the society.

The Governor announced that LREB member counties will in September 2018 hold the third Summit meeting in Nandi county followed by an investment conference in Bomet county in October this year. He thanked development partners GIZ, Oracle, AMREF, Ford Foundation, UK-USAID, Red cross and Equity bank among others for supporting LREB’s course.