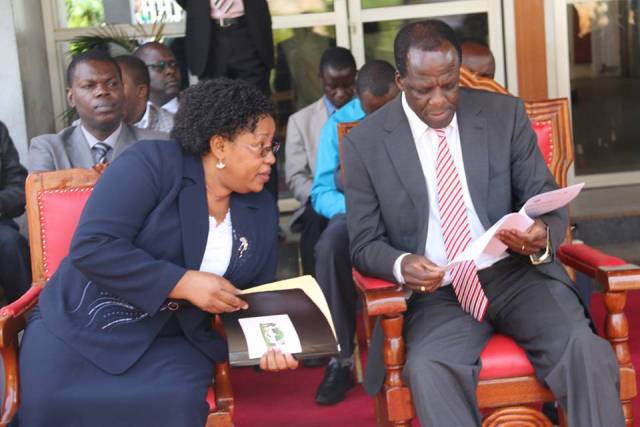 Speaking during the event, Kakamega County Governor, H.E Governor Wycliffe Ambetsa Oparanya directed that the funds will be administered by the county’s Ministry of Education, Science and Technology in collaboration with the Higher Education Loans Board (HELB) as the independent fund manager.

H.E Governor Oparanya noted that the county government is keen on improving access, quality and technology in the education sector at all the levels of learning. He added that the 20 million allocated for the year 2015/2016 was distributed with fairness to all the applicants with regard to, amount awarded by the HELB national kitty, geographical representation, courses undertaken, gender and levels of need of the applicants.

Higher Education Loans Board Chief Executive Officer, Mr. Charles Ringera explained that the procedures followed in awarding the applications was a clear representation of the needs of the applicants as was highlighted in their application documents.

Mr. Ringera encouraged applicants in the future to use the online process of application for ease of access. He expressed his concern however on the wide gender gap that still exists as 67% of the total beneficiaries were male with a paltry 33% being female.

The 2015/2016 fund was distributed to 1,160 beneficiaries across the county.Malava sub-county posted the highest number of applicants at 149 students, followed by Mumias East with 135 applicants.

Lugari sub county had the least number of applicants with 37 students applying for the loan. ksh. 2,405,000 was shared amongst the applicants from Malava Sub County as the 37 students from Lugari Sub County received kshs. 596,000.

CECM for Education, Science and Technology Ebby Kavai challenged students from the sub counties that recorded low numbers of applications to apply for the county helb loans.

Other guests in attendance were, CEC members, Knut and Kuppet officials, Mmust representatives, beneficiary students among others.