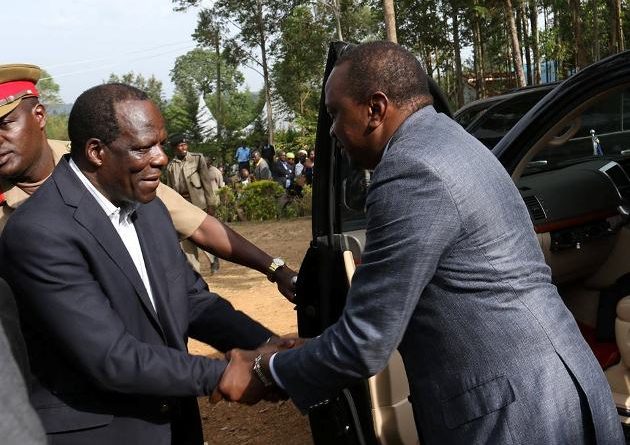 The President praised the late former Malava Member of Parliament , Cabinet Minister and Chairman Agricultural Development Corporation for his resilience and dedication in serving the people of Malava Constituency and Kenyans at large.
President Uhuru confirmed that the rough Kakamega – Webuye road will be tarmacked soon after the court ruled in favor of the National Government in a case filed by the challenging the government’s move to terminate the contract on grounds of failure to meet deadlines. He promised to come back soon on development agenda.

Governor Oparanya reiterated the need for the National Government to speed up the construction of Kakamega-Webuye Road adding that once complete, it will contribute immensely to the county government’s efforts of making Western region an economic hub. Governor Oparanya winded up his brief speech by recognizing his fellow Hon. Governors Ken Lusaka (Bungoma) and Sospeter Ojaamong (Busia) who came to mourn with him.

Betty Soita, wife to the late Hon. Shitanda, termed him as a generous man whom many took advantage of. The widow, however, said her family will endevor support the less fortunate in the society as the late Soita did.

The funeral was also attended by Honorable Nominated Senators Beatrice Elachi and Daisy Kanainza, Hon. MPs, Hon. MCAs as well as men and women of decorum from Kenya and abroad.