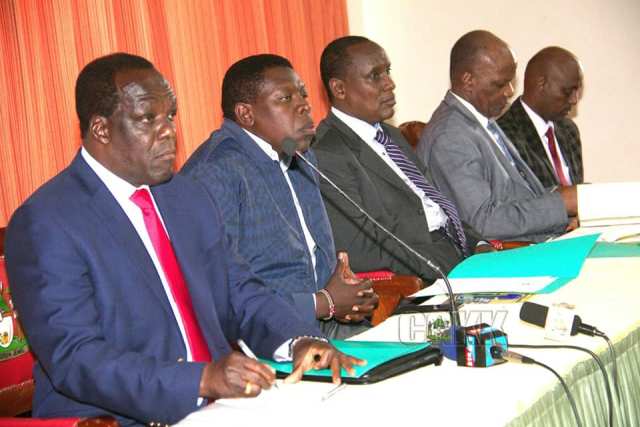 Leaders from Western Kenya have today held a consultative meeting at Golf Hotel, Kakamega to map out strategies for the region’s effective participation during the 5th Annual Devolution Conference to be held at Kakamega High School from 23rd to 27th April 2018.

The meeting chaired by Devolution Cabinet Secretary Eugine Wamalwa and attended by among other leaders host Governor H.E. Wycliffe Ambetsa Oparanya and his Vihiga counterpart H.E Dr. Wilbur Ottichilo discussed wide ranging issues with regards to the region’s preparedness as it gears to host the much awaited conference which brings together over 6000 delegates.

Governor Oparanya said the conference financed by the Council of Governors, the Ministry of Devolution, the Senate as well as other development partners; will have a big economic boost for Kakamega county and the entire region hence the need for leaders to read from the same script. He also used the platform to announce the huge steps so far realized in formation of the Lake Region Economic Block which is aimed at positively transforming the economic status of the region.

Devolution CS Eugene Wamalwa thanked the host Governor for successfully convening the meeting despite the short notice and exuded confidence that Kakamega will indeed successfully host the most important day on the calendar of Devolution in the country. Kakamega County Deputy Governor H.E Prof. Philip Kutima, County Member of Parliament Hon. Elsie Muhanda and Kakamega County Assembly Speaker Hon. Morris Buluma among others.