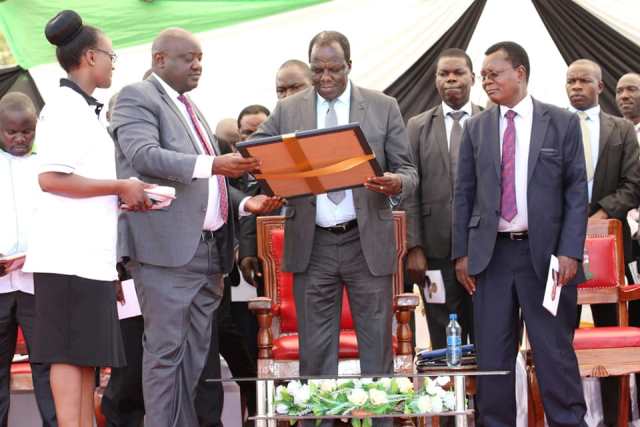 However, in response, Governor Oparanya said the work involved was too weighty for any one leader. “I appreciate your support which is commendable coming from leaders of your calibre, but I cannot succeed alone, neither can senator Malala, Hon. Elsie and Washiali,” he said.

The governor said restoration of Mumias Company to profitability was achievable only if the national government is committed to the cause. He regretted the mixed signals from Nairobi through Kenya Revenue Authority’s demand for payment of tax arrears running into billions of shillings, not to mention demand notes from major creditors of Mumias Sugar Company.

On the taskforce’s work under the leadership of CEC member for Trade, Industrialization and Tourism, Mr. Kassim Were, the governor commended the team for an excellent job adding that their report clearly demonstrated that the members had adequately interrogated the Terms of Reference.

Mr. Were highlighted some of the key actions needed to alleviate the suffering of Mumias residents, particularly cane growers, besides the revival of the factory. They included protection of public assets such as public and community land, from looting, plunder and theft. The Mumias nucleus farm measuring 4,294.8 hectares was singled out as it is supposed to be under cane and factory development including housing and school projects.

The governor agreed with the Taskforce findings including the fact that poor governance had led to the collapse of Mumias Sugar and farmers abandoning cane production. He also said anybody found to have engaged in corruption and theft of public property at the company will have their names forwarded to the Directorate of Criminal Investigation and Ethics and Anti Corruption Commission for appropriate action.

Some of the cane development strategies and sugar production operations recovery efforts recommended by the Taskforce and endorsed by the County boss include:
Availability of raw materials for sugar production, factory rehabilitation, safeguarding company assets from looters and grabbers, access to cheap credit by farmers through cooperatives and County government Investment Agency and Microfinance Corporation, to name but a few.
Besides the unveiling of Mumias revival Taskforce report, H.E. the governor launched Mumias Municipality Charter and board following the elevation of the town to Municipal status.
Among the newly appointed Board members is retired veteran sports administrator, Mr. Sam Obingo.

Also in the board is CEC member for Lands, Urban Areas and Physical Planning, Mr. Alfred Matianyi and Chief Officer, Patrick Lukoko all of whom were sworn in today.

Governor Oparanya said the major responsibility of the board was to take charge of the municipality’s planning, infrastructure development and promotion of investments as well as quality service delivery for its inhabitants.