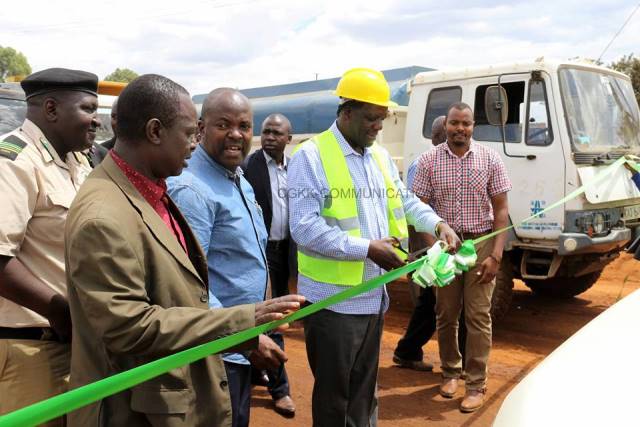 While in Likuyani Sub-County, Governor Oparanya launched the upgrading of Soi-Kogo Road from all weather road to bitumen standards, which is expected to be complete by December this year, and went ahead to commission ECDE classrooms in three primary schools; St. Monica in Kongoni Ward, Sikhendu in Likuyani Ward, Lurende and Ngao PAG Primary Schools in Sinoko Ward.

The Governor promised to continue with the construction of ECDE classrooms in all public primary schools in the county to provide a better education foundation to the young children. Oparanya also mentioned the employment of ECDE teachers on permanent and pensionable terms as one among the major milestones achieved in the education sector by his government and promised to better the sector in his second term as Governor.

He urged residents to make use of the extended voter registration period due to elapse this Sunday to register as voters reminding them that Kakamega County was lagging behind in the exercise. Whereas IEBC targeted over 328, 000 new voters in the county only 105,000 people have so far been registered.

The County Chief met teachers from Lugari Sub-County at Lumakanda grounds on Saturday, and he will join other faithfuls for prayers in Lugari on Sunday before embarking on his mission of launching, inspecting and commisioning of more government projects in the region for the next two days.

The Governor who also opened the ODM Likuyani office in his capacity as the Deputy Party Leader of the party was accompanied by CEC Members, MCAs led by Leader of Majority in the County Assembly Hon. Robert Makhanu and Aspirants for various seats among other leaders.