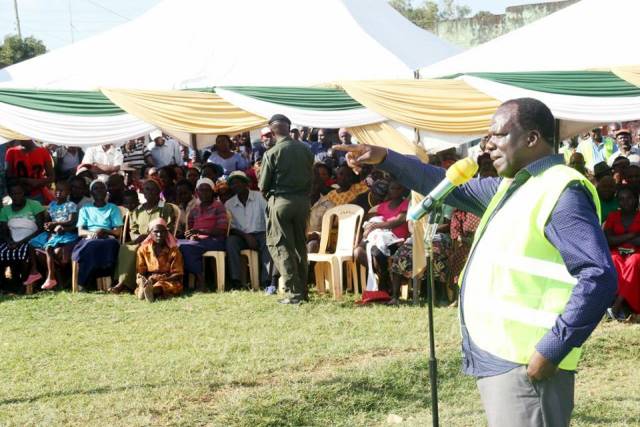 Governor Oparanya said the project is in line with the commitments he made to the electorate in his election manifesto. The project seeks to increase water coverage and provide safe and clean water to the residents of Kakamega at affordable cost. He also reiterated his commitment to transform living standards of the residents through provision of affordable health care, improved transport network, as well as water and sewerage services. Electricity supply to households is also a key deliverable in the governor’s priorities.

Today the Governor installed a water hydrant and launched an 8km pipeline extension from the Milimani water storage reservoir to Bishop Stam water storage. In addition, he installed a 100 cubic metres elevated storage tank at Bishop Stam. The government is partnering with USAID-KIWASH, a key water projects development partner of the county government, through the ministries of environment and health.

Kakamega Deputy Governor H.E. Prof. Philip Museve Kutima said the systems laid down by Governor Oparanya will transform the living standards of Kakamega county residents if implemented fully and underscored his willingness to continue with the implementation beyond Governor Oparanya’s second term if elected to the county’s top seat in the next general election.