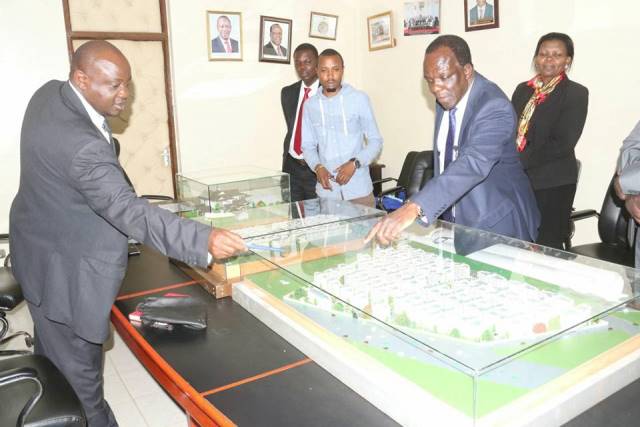 THE headache of acute shortage of residential houses in the two major towns of Kakamega and Mumias will be a thing of the past if an elaborate project by H.E. Governor Wycliffe Ambetsa Oparanya to construct 3000 housing units comes to fruition.

The project whose construction was shelved two years ago due to a delay in acquisition of important documents such as lease agreements and title deeds for government land in the towns is now ready to commence after the county government acquired them.

Speaking in his office today, Governor Oparanya announced that the county government had completed the fixed asset inventory exercise and was ready to begin construction of affordable One, Two and Three bedroom housing units as well as executive bungalows to accommodate county government staff and residents of the county who reside in the towns. The county government of Kakamega has provided 18 and 15 acres of land in Kakamega and Mumias towns respectively and welcomed the national government’s plan to construct 1000 more housing units in the county in line with the ‘Big Four’ agenda. Further expansion of the housing project will be spread to the fast growing Butere and Malava towns.

Lands, Physical Planning and Urban areas CECM Mr. Alfred Matianyi said the spatial planning carried out earlier in the two major towns will speed up implementation of the project to offer residents affordable and decent housing.